The retailer aims to gain market share in handbags with a celebrated face and high-profile campaign.

The Paris-based brand revealed exclusively to WWD the launch of a handbag collection, Zadig & Voltaire x Kate Moss, bowing Sept. 26, a day after the label’s runway show at the Ritz in Paris. (The location was chosen because it was one of the supermodel’s haunts.)

“The primary reason for partnering with Kate was to work with her creatively on developing a new line of handbags. And so this is what they’ve done,” said Christopher Tate, chief executive officer of Zadig & Voltaire, North America, and a board member at the company. “Cecilia [Bönström, Zadig & Voltaire’s creative director] and Kate were models at around the same time and sort of grew up in the industry together, so it’s not a new relationship. This is the first time they’re working together at Zadig & Voltaire in the context of collaborating on products.”

“She was a customer of Zadig & Voltaire — her daughter loves our T-shirts, and we had some friends in common, so we were linked. But then, she’s such a superstar, it’s not like I’m going to hang out with her everyday,” said creative director Cecilia Bönström. “I admired from afar. But then, she’s been a busy girl, you know. Now finally, I’m collaborating with her. It’s more than just being the face of my campaign.”

“For many brands, this would be a very expensive endeavor if it was simply hiring Kate Moss, but there’s a relationship there,” Tate said. “The fact that Cecilia and Kate have a preexisting relationship helps. The best collaborations are organic relationships where people genuinely want to do things together. Everybody hopefully will benefit from creating a set of products together.” 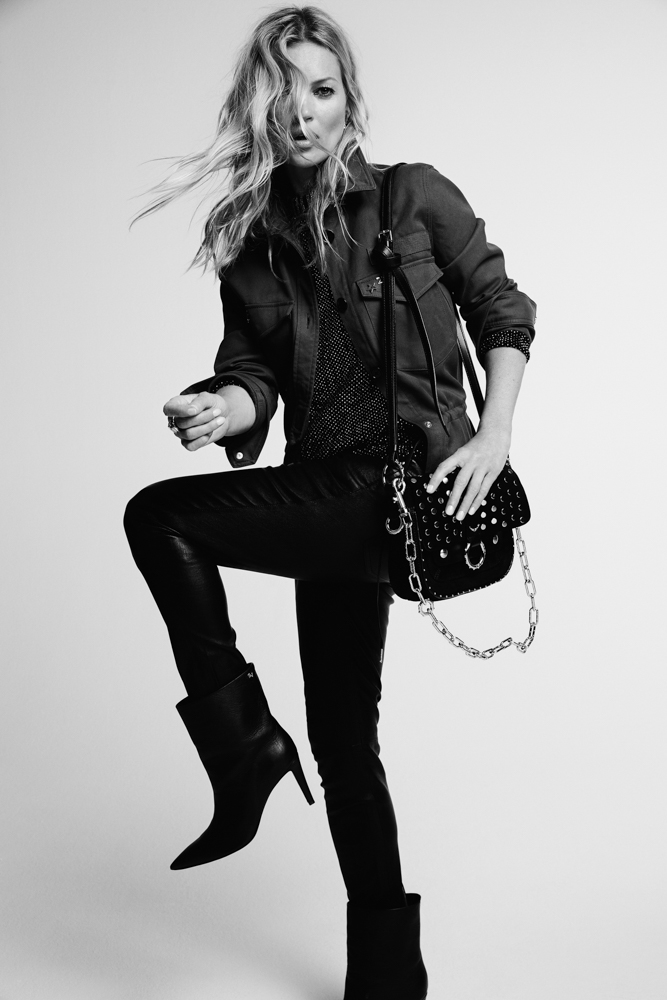 Asked if Moss will be getting a percentage of sales, Tate said, “We can’t give any details of her arrangement.

“There are very few internationally known, household-name fashion models, who are celebrities in their own right, and Kate is certainly one of those,” said Tate. “Any time you have the opportunity to partner with someone of that significance — for a brand like Zadig & Voltaire, which is a global brand, it’s important to have an ambassador who can translate your idea around the world — we think Kate is perfect for that.”

Bönström and Moss communicated across the English Channel, but the creative director said it went smoothly. “We totally have the same aesthetic. I went to London and went to her beautiful house and I went through her closet. We were talking, and I said, ‘You need to do something that ‘s really, you, with all the  inheritance and taste of Kate, and put together with all the aesthetics and energy of Zadig.”

Moss’ involvement isn’t just a one-night stand. “It’s meant to be a long-term collaboration,” Tate said. “This will not be the only collaboration with her, for sure. We’re in the works on something, which I’m sure will involve handbags, and will possibly involve more than that.”

“We have a second season coming up with Kate, Bönström said. “She has a lot of ideas. When she signs with a brand, she really breathes with the brand.”

The Kate bag, which is available in four styles, will be sold through Zadig & Voltaire’s retail network and zadigetvoltaire.com, as well as Farfetch. Handbag prices range from $360 to $780.

Moss is doing double duty. In addition to collaborating on the Kate bag collection, she’ll be seen in a campaign concept bowing in September created in collaboration with PlayLab, the creative collective that’s collaborated closely with Louis Vuitton men’s creative director Virgil Abloh.

The campaign, “Kate in Paris,” might be a bit deceiving. Images for a product campaign with Moss wearing the handbags were photographed in Paris, then displayed within the context of Paris, Tex., the Lone Star state town known for the iconic 1984 indie film of the same title.

PlayLab descended on Texas, possibly the very spot where a craggy Harry Dean Stanton wandered out of the desert and into the town. “In essence, we took over the town with an outdoor campaign filling buildings, billboards — all of it — with the Kate Moss campaign images, and then ‘local photographers’ shot the advertising [on outdoor and in windows, and more] under PlayLab’s art direction.

“It’s a beautiful campaign,” Tate said. “They’re not just beautiful images that are interesting, but they create a story line and build up to Kate [on the catwalk] in the real Paris in September. That’s when we’ll be launching through our digital channels and social media, and our partners.”

Tate described Paris, Tex., as a bit of a down-on-its-heels middle-American town. “For lack of a better word, it felt very much to me like Marfa, Texas,” Tate said, referring to the small desert town that’s captured the fancy of the art world. “I wouldn’t qualify it as a ghost town, but there’s a lot of vacancies, but also a lot of heritage and beauty. We enjoyed capturing that and the contradictions between that town and Kate Moss, and of course, the play on words.”

“We’re continuing to go against the grain with physical retail,” Tate added. “This year, a good amount of new stores are opening in the U.S., including Houston and San Jose, Tex.; one, possibly, two stores in Florida; American Dream, East Rutherford, N.J.; Greenwich, Conn., and a new flagship on Madison Avenue. There’s lots of other things we’re working on, but those are confirmed.

“We’re going to continue on this path with young artists,” Tate said, referring to the brand’s passion and the works it displays in stores around the world. “We developed a new platform inside some of our stores using projection technology, and we’ve commissioned young artists to create for it new works.

“Matthew Tierney, whose work has been shown next to Jean-Michel Basquiat will be launched at our recently opened San Fransisco store, and we already have several other artists working. Then, we’ll start to use this new technology to bring art to life on a grander scale in our stores.”

Tate said exhibiting art using the platform requires significant space in a store. “Our SoHo flagship will have it. The technology is very particular, it needs a lot of wall space,” Tate said, noting that the “canvas” projected on a store’s wall is 60 feet by 40 feet. 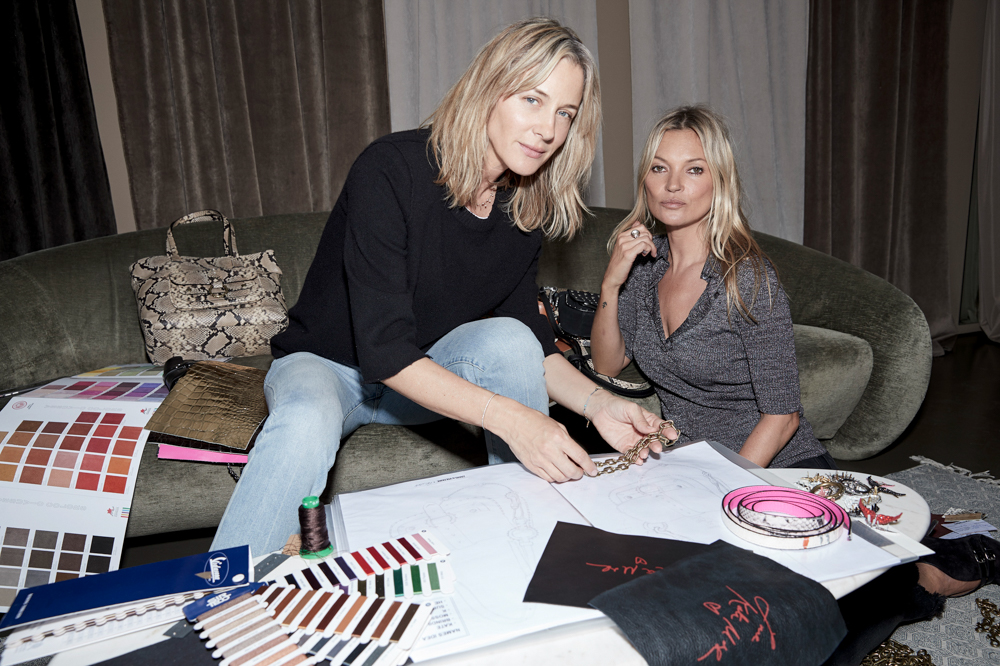 “We have an amazing store on Madison Avenue and 77th Street.” Tate said. “We’re looking [for space] four times the size of the existing store, so that we can showcase all of the categories we want, and have a proper gallery for art. We’re in final real estate negotiations. It will probably open at the end of 2020. Whether we’re going to keep the original space has yet to be determined.

“Growing online and digital remains a key initiative of every band, but with acquisition costs growing substantially in the digital space and new regulations around privacy that appear to be coming, physical retail is still an incredible way to grow, and it’s been incredibly profitable for us,” Tate said. “The margin for error is very small. The brands that aren’t delivering at the right level will find it very tough to perform, but if you’re doing it right, physical retail can still be quite relevant.”

Zadig & Voltaire, which reportedly did $400 million in sales this year, in April broke onto Deloitte’s annual list of the 100 largest luxury goods firms in the world and Tate has been positioning the label to aggressively move in to take market share.

“The world of luxury is the world of handbags,” Tate said. “Luxury apparel is a small percentage of the [overall] business. For Zadig & Voltaire, a brand that sits under luxury, our apparel has been the resource for the luxury consumer for decades. We think it’s a logical step for us to continue to evolve and elevate our handbag offering, along with our other non-apparel offerings.”

“We think the designs and styles of the bags are quite innovative,” Tate said, adding that “handbags are approaching 20 percent of total sales volume. We hope this collaboration will help us [grow] that.”

While Zadig & Voltaire offers a large range of handbags, the Kate bag collection will get special treatment. “We’ll have a dedicated marketing strategy in addition to the ad campaign, and a very focused worldwide distribution with Farfetch as the primary launch partner.

“There will be installations at of our locations, and they’ll really tell a story. Farfetch has a great platform that allows you to tell a story, and obviously an incredibly-sized audience,” Tate said. “It’s a luxury audience and we felt that this was luxury product, which was made in Italy needs to be shared with a luxury audience.”