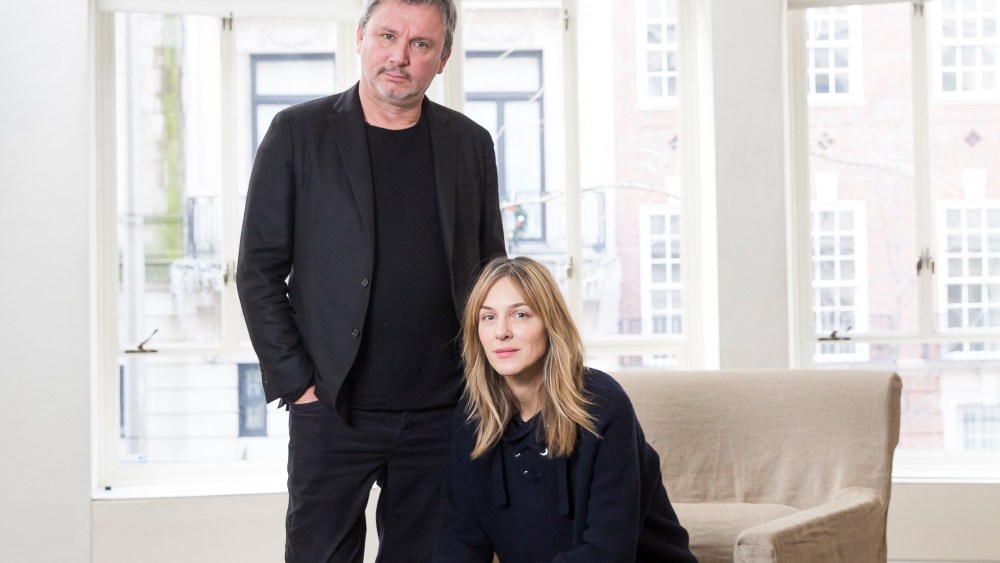 NEW YORK — Zadig & Voltaire, the advanced contemporary firm based in Paris, is aiming to make greater inroads into the U.S. market.

The brand, which will celebrate its 20th anniversary this year, plans to show during New York Fashion Week for the first time. The collection will be presented in a runway show on Monday, Feb. 13 at 2 p.m. at Skylight Modern at 537 West 27th Street in Chelsea. The brand has previously shown on the Paris runways but had recently switched to a presentation format at its new headquarters in a townhouse on Avenue d’Iena in the 16th arrondissement.

Known for its clothing with edgy, rock-chic looks as well as sportswear, Zadig & Voltaire chose to show in New York for several reasons.

“New York is my second home,” said Thierry Gillier, founder and chief executive officer of Zadig & Voltaire, in an interview with his partner, Cécilia Bönström, artistic director, at The Mark Hotel here.  Bönström said the fall collection shows how the Parisian woman is reborn into a New Yorker. “It’s a wink to my muse Carolyn Bessette-Kennedy,” she said.

The company’s fall show will feature a mix of new models and those who have previously worked with the house, such as Erin Wasson (although she’s not 100 percent confirmed). It will also include eight “see-now-buy-now” pieces.

Zadig & Voltaire, which generates 350 million euros, or $364.5 million at the current exchange, in sales, has 318 stores worldwide in cities ranging from Paris and Los Angeles to Hong Kong and Melbourne, along with a robust wholesale business. The brand sells such retailers as Galeries Lafayette and Printemps in France; El Corte Ingles in Spain and Portugal; Harrods and Harvey Nichols in the U.K.; La Rinascente in Italy; Sogo in Hong Kong; Lane Crawford in Hong Kong and China; Globus in Switzerland, and KaDeWe in Germany. In the U.S., the brand is distributed to about 500 doors, including Bloomingdale’s, Nordstrom and Neiman Marcus, as well as Shopbop.

With four stores in New York City and 25 throughout the U.S., Zadig & Voltaire is getting ready to open a fifth unit at 453 Broome Street in Manhattan. That store, which has 3,000 square feet of selling space, is expected to open in April.  The company recently unveiled a store in Australia, and plans 13 units there over the coming year. In December, Zadig & Voltaire opened a store on Melrose Avenue in Los Angeles, joining existing Zadig & Voltaire doors on Rodeo Drive in Beverly Hills, Sunset Boulevard in West Hollywood, the Malibu Country Mart in Malibu and the Forum Shops at Caesars Palace in Las Vegas.

Currently, accessories account for 30 percent of the business. The brand produces handbags, footwear, scarves and hats. It also has licensing deals for watches (Red Luxury) and sunglasses (Rigo Vision SPA) and has two perfumes — one for him (This is Him!) and one for her (This is Her!), licensed to Shiseido Group. It launched its first fragrance, “La Pureté,” in 2009, which was developed in collaboration with Le Labo and is still available. Zadig & Voltaire’s web site, which was launched overseas in 2006 and in the U.S. in 2012, is the number one volume generator, said Gillier. The brand, which maintains an artistic bend, launched an independent music label, Zadig & Voltaire Music, in 2009, which is currently on hold.

To acknowledge its 20 year anniversary, the company has teamed with Parsons Paris The New School for Design students on the windows of its flagships in New York and Paris, where third year students were given carte blanche to decorate the windows. The Parsons’ windows are now live at the store’s flagship on Madison Avenue and in Paris. The second round of Parsons’ windows will be up at the end of February, and there will be a third round in September.

A collector of contemporary art, Gillier was born in Troyes, France. His mother was a stylist and his grandfathers owned factories. He followed a girl to the U.S. in the Eighties, got a degree from Bard College, where he studied painting and film, and also graduated from Parsons The New School of Design. He went to work for several designers, including Thierry Mugler, before starting his own brand in 1997.

Over the years, the brand has experimented with loose knits, washed leathers, digital prints on jerseys and putting gold in yarns. Zadig & Voltaire has established brand staples, such as the Tunisian T-shirt, The Rock Clutch and word-embellished knits such as “Mick,” “Love,” “Rock” and “Amour.”