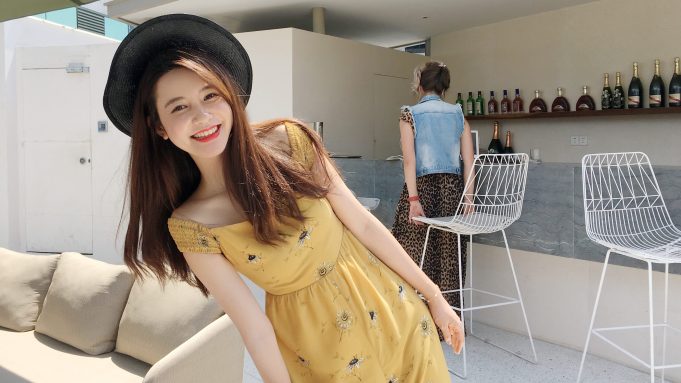 HANGZHOU — With long hair, fair skin and a sweet smile, Zhang Dayi seems like the ultimate girl next door. That is, if the girl next door was a multimillion-dollar business and one of Taobao’s biggest revenue drivers.

At 29, Zhang’s youthful looks and soft-spokenness belie the shrewd businesswoman she is — a quick online search of her name reveals how she became known across China for earning a reported $46 million last year. To put that into perspective, that’s more than double what top A-list actress and haute couture favorite Fan Bingbing pulled in, and just edges out Forbes’ estimate of Kim Kardashian’s $45.5 million earnings.

Even before she opened up her fashion store, Zhang had garnered a following of 200,000 people thanks to a modeling career which spanned eight years. But she traded that in for designing apparel — mostly affordable, feminine and flirty styles — launching her first Taobao store in summer 2014. Unlike most key opinion leaders (KOLs) in the West who rely on a cut of sales made from affiliate links to earn their money, Zhang is able to sweep up and keep a lion’s share of the money she generates thanks to her own line that’s produced in-house.

Zhang appeared as a special guest at the recently concluded Taobao Maker Festival — clad in a black dress of her own design and a lipstick she created, of course — after being crowned one of the top stores on Alibaba’s consumer-to-consumer platform.

Here, she explains to WWD how the unique China ecosystem — with manufacturing close by, management firms tailored to handle the modern-day Internet celebrity, and an online marketplace — has enabled her to get to 5 million fans.

WWD: How would you describe your own aesthetic and what are your style influences?
Zhang Dayi: I really liked Japanese style when I was young. Most of my [modeling] clients were Japanese as well, and so that influenced my style and I probably looked a bit Japanese. Later, Korean style became more popular and I started wearing more loose and casual silhouettes.

WWD: Why do you think people like you?
Z.D.: It’s a question I get a lot. I think it’s because I’m outgoing, relatable and sweet-looking. The biggest market in China is the sweet-looking style dresses. There is no single reason; I matched the market.

WWD: Do you miss being a model?
Z.D.: It was a different type of hard work. To be honest, I don’t like being a model because I don’t want to perform. I worked as a model for so long because it pays well, pays better than other work. It is true that physically and mentally, I am more tired than before. But I am much happier than before because I get to be myself.

I always tell my fans that if I were you, I would be very happy because when I was young, if I really wanted a piece of clothing that the model was wearing, I had no idea where to buy them. Today, let’s say I am your idol. You like me, you like what I am wearing, and you can buy it in my store — so the fans are really happy. They have more options than what the big brands can provide them. They can buy a personalized dress in my store. Internet celebrity is better because of its authenticity.

Do you like to watch commercials? People don’t believe in it because it’s an advertisement. When they get to know you, what you wear, what you sell — lipsticks, dresses. They don’t want the exact dress you have, they want your lifestyle.

WWD: What exactly do you like about Kendall’s and Gigi’s styles?
Z.D.: I think they represent the new youth. You should know and understand what and how young people think. Young people don’t accept or don’t buy Louis Vuitton because they don’t understand those big brands. They’d rather buy something from people their same age.

WWD: Does any particular moment in your career stand out?
Z.D.: The most memorable moment was the Double 11 [Singles’ Day] sale last year. I was the first Taobao store that broke the 100 million renminbi ($14.7 million) sales record. I thought that was really impressive.

WWD: What are sales like this year?
Z.D.: It’s still the middle of the year, and this year I newly opened an underwear store and a cosmetics shop. In total, I own four stores. I put aside the men’s wear store because I couldn’t make enough time. So the sales with the clothes alone last year were over $60 million.

WWD: What posts get the most engagement?
Z.D.: The most commented posts are interactive posts. You have to bring questions into it so you can interact with people. For example, if I say “This is such a pretty outfit!” If people think it looks ugly, then they won’t reply, but if you ask “What do you think of this dress?” it’s different.

Another example, a sentence like, “I think this lipstick is beautiful,” versus, “Which color of lipstick do you like?” One is a statement, one is a question. The latter is more interactive. That way they know you are looking, and you can even reply to them. Fans like that.

WWD: As you get older, are you worried it will become harder to maintain and attract audiences?
Z.D.: Of course, I have thought of it. It’s already a huge number of fans to manage, and I have to take care of their different customization demands. Their demand is way over our supply so this year we opened the cosmetic and underwear store.

Fans like me — not only my style — but also my outlook, values, way of communication. When I get older, my fans will also grow from students and they can earn more money from work. That means they can purchase better stuff. So my product has a lot of space to improve. I could sell diamond rings, right? And wedding dresses and other lifestyle.

WWD: Have you thought about expanding overseas to other parts of Asia or the West?
Z.D.: Of course, we are working on this. We just opened Facebook and Instagram accounts. We are testing which city and country likes me better. We are working with Asia mostly — Singapore, Japan and South Korea. Their habit to purchase online is different. They are not used to buying things on Taobao, so it takes time but now we’re focusing on growing followers on social media and will work on getting to the transaction later.

WWD: The online KOL space is so crowded now. If you started now, as opposed to a few years ago, do you think you would be as successful?
Z.D.: I can’t know the things that didn’t happen, but timing was very important for me to have such a outcome today. But if I were someone else and if I opened a store now, I think I would still be very likely to succeed.