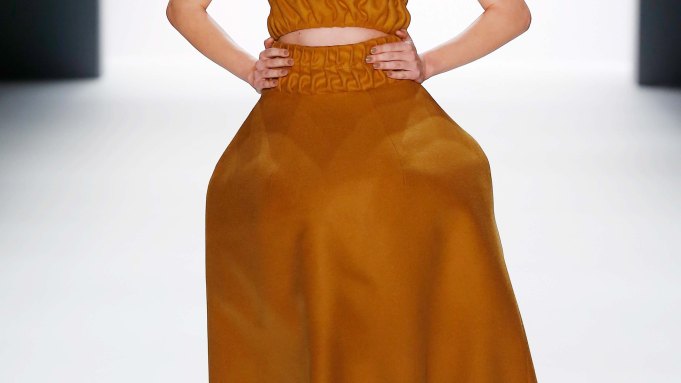 Inspired by mountain bike racing, Zukker’s fall collection had a few figurative peaks and valleys. The irreverent Leipzig-based brand helmed by Heike Becker, Benjamin Kräher and Sebastian Schettler excels at coats, and introduced new retro-influenced variations, including one with a dropped waist and box pleating. Doing double duty, raincoat fabric was used for more than just outerwear, providing sheen to a full skirt. Thick smocking cinched the waists of coats, and while faux fur brought color to looks in shades of blue and russet, it also added unwelcome bulk when used on dresses and skirts. A cropped tweed cape jacket paired with a long slim skirt, and a jaunty fox red jumpsuit, on the other hand, were some of the lineup’s smoothest terrain.