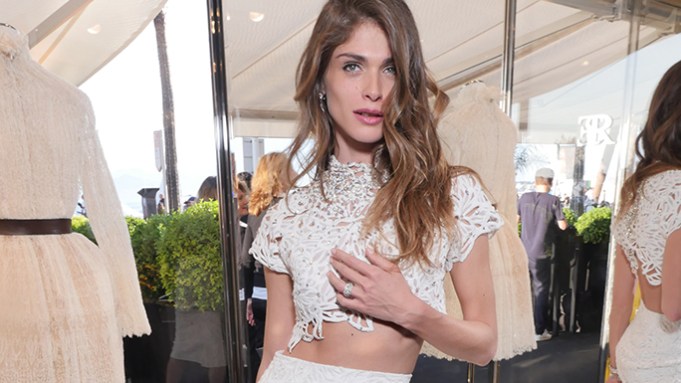 FLYING THE FLAG: Ermanno Scervino hosted a cocktail on Tuesday in his boutique on the famed Boulevard de la Croisette in Cannes to celebrate his capsule collection of gowns for the red carpet.

The Italian designer arrived with model, actress and activist Elisa Sednaoui, the face of his company’s advertising campaign for the second season in a row.

The capsule line, a preview of the brand’s fall collection, consists of two long dresses available in two variations and four colors: red, white, black and yellow. “I dedicated the whole collection to lace,” said Scervino, who has the clothes made in his workshops in Florence.

Sednaoui wore a midriff-baring cream top and skirt. “For me it’s always delicate to find the right amount of skin shown. I’m always a bit uncomfortable, and I thought here there was a perfect proportion of things, so it is sensual but it’s not overly sexy,” she said.

“What is special about the brand is the quality. I mean, each piece is produced in Italy as if it was haute couture fashion,” she noted. “As an Italian, I’m proud to see the ‘Made in Italy’ celebrated in this way.”

Sednaoui planned to return to her husband and two-year-old son in London before heading to Paris later this week to take part in a roundtable discussion on women’s empowerment and social entrepreneurship in the Middle East at the elite Sciences Po school.

She was also gearing up for the launch of her namesake foundation in Italy. Under a partnership with Save the Children, the foundation will host its first workshop next week to train people in offering arts-related, after-school activities to children and teenagers.

Scervino said he was drawn to Sednaoui as much for her personality as for her looks. “I like her because women recognize themselves in her. She is not just a model, she is a woman. She perfectly embodies the spirit I am trying to project,” he remarked.