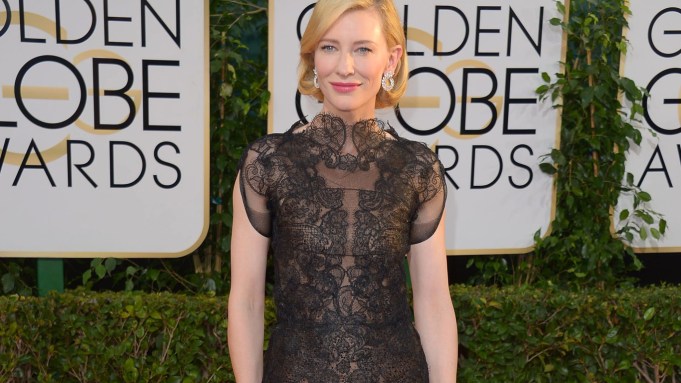 Now that the Oscar nominations are out, the race is on to see who will dress the nominees and who will nab the Best Dressed Award at the Feb. 28 show. This year’s chosen ones represent a mix of veteran screen stars and young breakouts, and red carpet watcher should brace for some serious fashion showdowns. Here, WWD handicaps the nominees.

Blanchett is one of Hollywood’s top fashion chameleons and she rarely makes a misstep. Her pink Givenchy at the Golden Globes was polarizing. As the face of Giorgio Armani’s Si fragrance, she has worn her fair share of Armani to the Oscars, but last year she scored one of John Galliano’s couture pieces for Margiela. A solid bet this year would be Alexander McQueen.

This year’s breakout star chose her gold Calvin Klein Collection wisely; she ended up taking home the Golden Globe in it. Larson has experimented widely this awards season, including an emerald Jason Wu at Palm Springs Film Festival and a Céline striped frock at W’s Best Performances bash. She has also worn dresses by young designers Jonathan Cohen, Wes Gordon and Antonio Berardi, so it’s anyone’s guess what she’ll choose for Oscars, but she has the most to gain from a fashion coup.

Since she’s on the Dior payroll, it’s a forgone conclusion what she’ll wear, but since the house’s atelier is in flux, it will be interesting to see what they come up with. Her modern red column at the Golden Globes was universally received as a “hit,” but J. Law gets love even when she’s tripping up the stair in a “ridiculous” (her words) ballgown.

Rampling is the closest thing to a screen icon among this year’s set. There’s a reason her nickname in Hollywood is “The Legend.” The former model still exudes sensuality at 69 and has barely changed her androgynous Sixties look, which still reads as minimal chic. As the quintessential Englishwoman living in France, we’d love to see her in Saint Laurent, Céline or Lanvin.

The incandescent Irish star also has an individual sense of style, so she could take a fashion risks. Her white Saint Laurent goddess gown at the Globes was fresh and pretty. So far, she’s had her pick of frocks by Burberry, Stella McCartney and Gucci, but she’s also worn fun prints by Duro Olowu.

The distinguished actor, who wore Givenchy to the Globes, has also gone for classic cuts by Ralph Lauren Black Label, Burberry and Calvin Klein Collection. Although many are sad to have seen “Breaking Bad” leave television (though his competitors in the Best Actor category are glad the monopoly is over), Cranston didn’t miss a beat with his first Oscar nod.

Damon’s everyman vibe serves him well on screen; he’s a handsome fellow with an athletic build (hello, Jason Bourne) and he could play it up more. He’s worn Ermenegildo Zegna and Calvin Klein Collection, but he has yet to find a signature look. This could be his year.

The Oscar frontrunner is a Giorgio Armani loyalist. With his trimmed-down physique, a custom tux should prove a winning combination.

Fassbender been wearing a lot of Tom Ford of late, and there’s no reason he shouldn’t continue to do so. At the premiere of “Steve Jobs” he chose Thom Sweeney. He will have the best accessory on the red carpet: girlfriend and Best Supporting Actress nominee Alicia Vikander (or is he the accessory?). Together they bring back shades of double-nominee couple Heath Ledger and Michelle Williams.

Redmayne sports the enviable frame of a male fashion model, so it’s no surprise he’s done well in Gucci, which he wore again to the Globes. He looks great in velvet Burberry and Saint Laurent. As long as he keep his sometimes unruly hair under control, he’ll be golden.