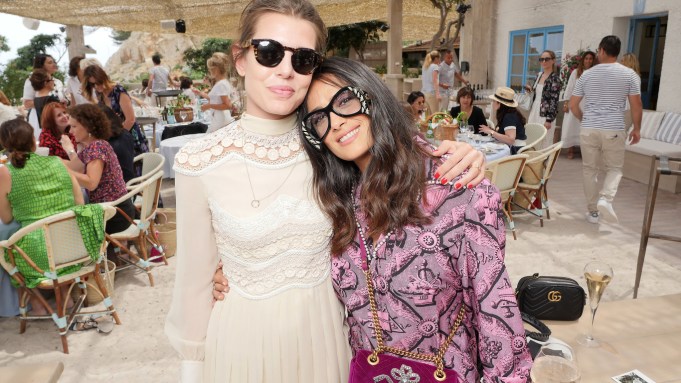 ISLAND LIFE: Clad in printed Gucci pajamas and quirky oversized shades, Salma Hayek was in a playful mood at a lunch held by Kering and Madame Figaro on Monday at La Guérite, an open-air seaside restaurant on Sainte-Marguerite island, a short boat ride from Cannes.

The event celebrated 70 women in film in the context of the 70th anniversary of the Cannes Film Festival.

“It’s lovely, we’re in nature, it’s a great atmosphere. The energy of it is healing for the festival. It’s so important that we women stick together and work together as a force, if we do this nobody can stop us,” said Hayek, who plays a healer and masseuse in her latest film, “Beatriz at Dinner,” directed by Miguel Arteta.

“I’m so proud, it’s one of the best things I’ve done in my life. It’s about the divorce of the two Americas, of the two philosophies in America and how they cannot reconcile. It’s extremely topical. John Lithgow is the other side of America, and he is brilliant in it,” she added.

She may be Grace Kelly’s granddaughter, but a shy Charlotte Casiraghi said she’s “more into producing than acting.” “I’m working on a project, but can’t really say much right now,” said the Monaco royal, who is rumored to be dating “The Little Prince” French film producer Dimitri Rassam.