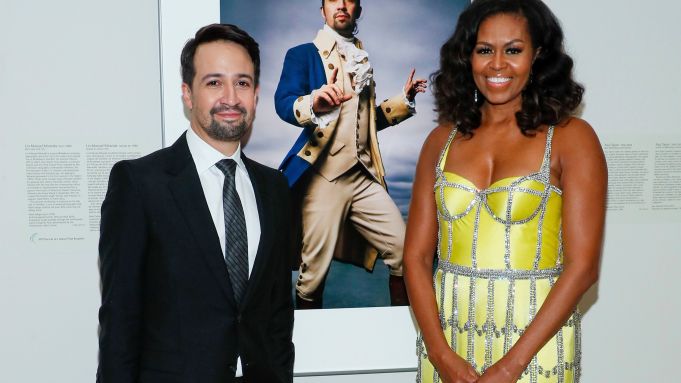 The former First Lady attended the annual gala Sunday night held at the Smithsonian’s National Portrait Gallery in Washington, D.C., to present the actor and Broadway composer with the museum’s Portrait of a Nation Prize.

“I first met Lin more than a decade ago when he came to the White House to perform the opening number of what he described as a ‘concept album,’” she said on stage. “And let me tell you, I became one of Lin’s biggest fans. I was fan-girling for Lin for years. I think I saw the production three times, maybe more, but I’m not here tonight just because of Lin’s achievements on stage or in film. I’m here because Lin believes that it’s his duty to lift up those around him, especially our young people.”

Obama attended the gala wearing a custom Schiaparelli Couture yellow dress with a chain-like detail. In a statement from the design house, creative director Daniel Roseberry stated, “The inspiration for the shape originally came from the crinoline, which is often found underneath couture gowns, but the real starting point for the overall look was the color. The acidic tone echoes Elsa Schiaparelli’s signature shocking pink, and we also felt that it matched the strength and energy of Mrs. Obama.”

The former First Lady continued showing her admiration for Miranda on Instagram, posting a photo of the two posing in front of his newly revealed portrait, which shows him dressed as his “Hamilton” character.

Click through the above gallery to see more from the American Portrait Gala 2019.