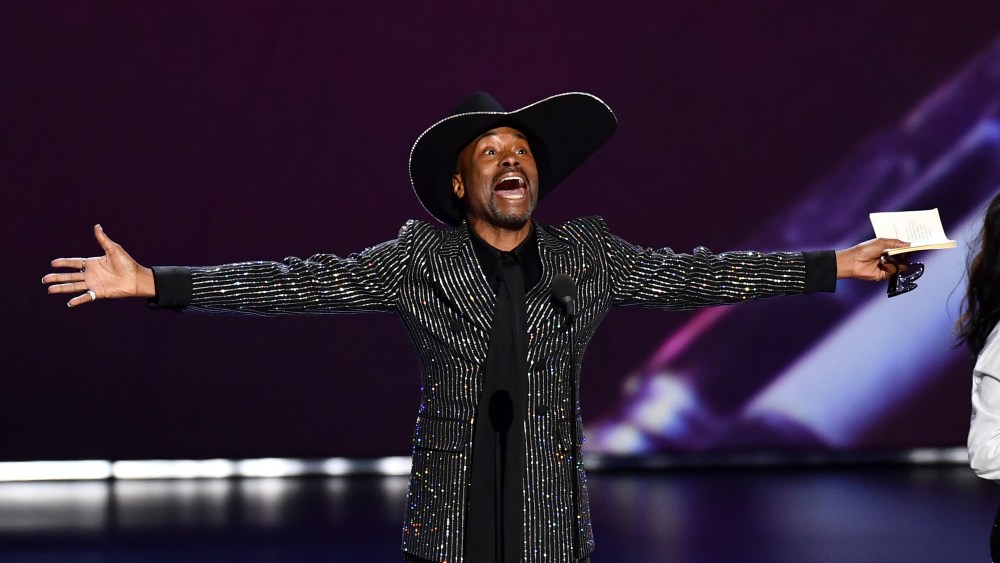 The 2019 Emmys may have been a big night for shows like “Game of Thrones” and “Fleabag,” but the focal point of the evening was a number of inspirational speeches from celebrities like Billy Porter — who made history as the first openly gay black man to win an Emmy for lead actor in a drama; Michelle Williams, and Alex Borstein, among others, who spoke on subjects like women’s rights, equal pay and the LGBTQ community.

From Laverne Cox’s Emmy’s clutch with a hidden meaning to Patricia Arquette honoring her late sister, here are the most inspiring moments from the 2019 Emmy Awards. 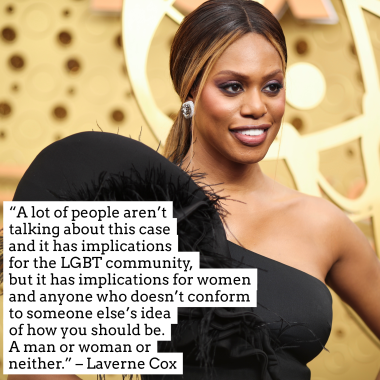 While the most noticeable Emmy’s fashion trend was the pink and red dress, Laverne Cox made her own statement on the red carpet with her custom rainbow Edie Parker clutch that read “Oct. 8,” “Title VII” and “Supreme Court.”

The actress, who was nominated for Outstanding Guest Actress in a Drama Series for her role in Netflix’s “Orange Is the New Black,” created the clutch to bring awareness to the Trump administration’s briefing on Title VII of the Civil Rights Act of 1964, which would make anti-gay discrimination legal in the workplace. The case will be presented to the U.S. Supreme Court on Oct. 8.

“Maybe it’s about raising awareness so everyone knows that our lives are in danger,” she said on the red carpet. “A lot of people aren’t talking about this case and it has implications for the LGBT community, but it has implications for women and anyone who doesn’t conform to someone else’s idea of how you should be. A man or woman or neither.” 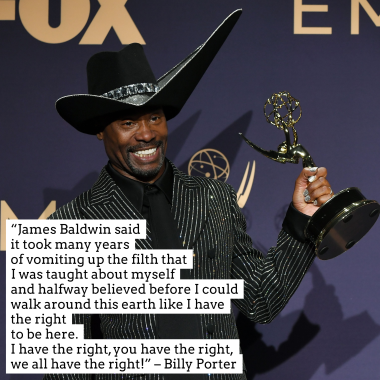 Billy Porter’s extravagant red carpet look wasn’t the only highlight of the evening. The “Pose” actor made history as the first openly gay black man to win an Emmy for lead actor.

“The category is love y’all!” he exclaimed as he accepted the award. “I am so overwhelmed and overjoyed to live long enough to see this day. James Baldwin said it took many years of vomiting up the filth that I was taught about myself and halfway believed before I could walk around this earth like I have the right to be here. I have the right, you have the right, we all have the right!” 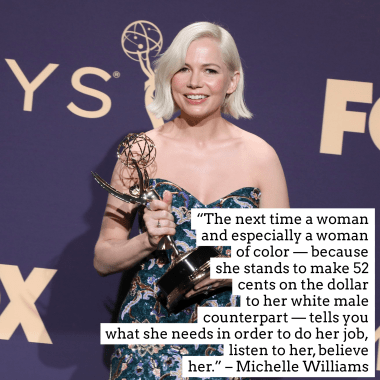 Accepting the Emmy Award for Lead Actress in a Limited Series/Movie for her role in FX’s “Fosse/Verdon,” Michelle Williams used her speech to shine a light on pay equity, especially for women of color.

“I see this as an acknowledgement of what is possible when a woman is trusted to discern her own needs, feel safe enough to voice them and respect it enough that they’ll be heard,” she said. “And so the next time a woman and especially a woman of color — because she stands to make 52 cents on the dollar to her white male counterpart — tells you what she needs in order to do her job, listen to her, believe her, because one day she might stand in front of you and say thank you for allowing her to succeed because of her workplace environment and not in spite of it.” 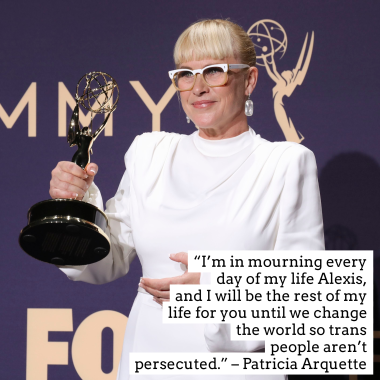 A double Emmy nominee, Patricia Arquette used her acceptance speech for Best Supporting Actress in a Limited Series/Movie for Hulu’s “The Act” to honor her late sister, Alexis Arquette, who passed away from complications from HIV in 2016.

“In my heart I am so sad,” she said. “I lost my sister, Alexis, and [the fact] that trans people are still being persecuted and I’m in mourning every day of my life, Alexis, and I will be the rest of my life for you until we change the world so trans people aren’t persecuted. And give them jobs, they’re human beings, let’s give them jobs. Let’s get rid of this bias we have everywhere.” 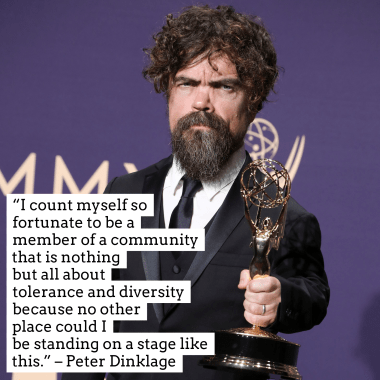 Despite “Game of Throne” snagging one of the biggest awards of the night for Best Drama, Peter Dinklage was the only actor from the show that won a solo Emmy. Nonetheless, Dinklage used his speech — part of which was bleeped out — to acknowledge the inclusive nature of the show.

“I count myself so fortunate to be a member of a community that is nothing but all about tolerance and diversity,” he said. “Because no other place could I be standing on a stage like this.”

Alex Borstein Tells Women to “Step Out of Line” 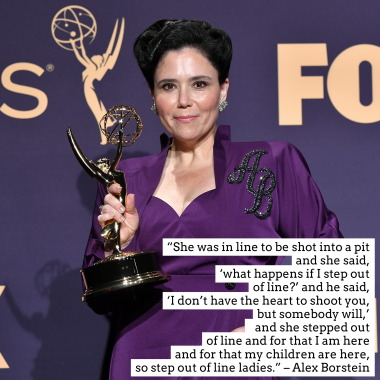 After chugging a miniature liquor bottle, Alex Borstein made her way to the Emmy’s stage to collect her latest award for Best Supporting Actress for her role in Amazon Prime’s “The Marvelous Mrs. Maisel.” She used her speech as a way to honor her grandmother, who is a Holocaust survivor.

Inside the 2019 Emmys Red Carpet

The Surprising Color Combination that Ruled the 2019 Emmys Red Carpet