Iconic dresses got a makeover and vintage looks made a comeback in 2019.

Celebrity red-carpet looks are making headlines more than ever.

This year, many of today’s buzziest celebrities have used their red-carpet appearances to showcase high fashion looks, creating viral moments that have stuck in the cultural lexicon.

Read More: The 7 Major Fashion Trends That Defined the 2010s

Vintage looks — ones by Thierry Mugler, to be specific — made a comeback on the likes of Cardi B and Kim Kardashian, while other celebrities such as Elizabeth Hurley and Jennifer Lopez celebrated their own iconic Versace dresses of the Nineties and early Aughts with reimagined versions.

Cardi B in Thierry Mugler, February 2019 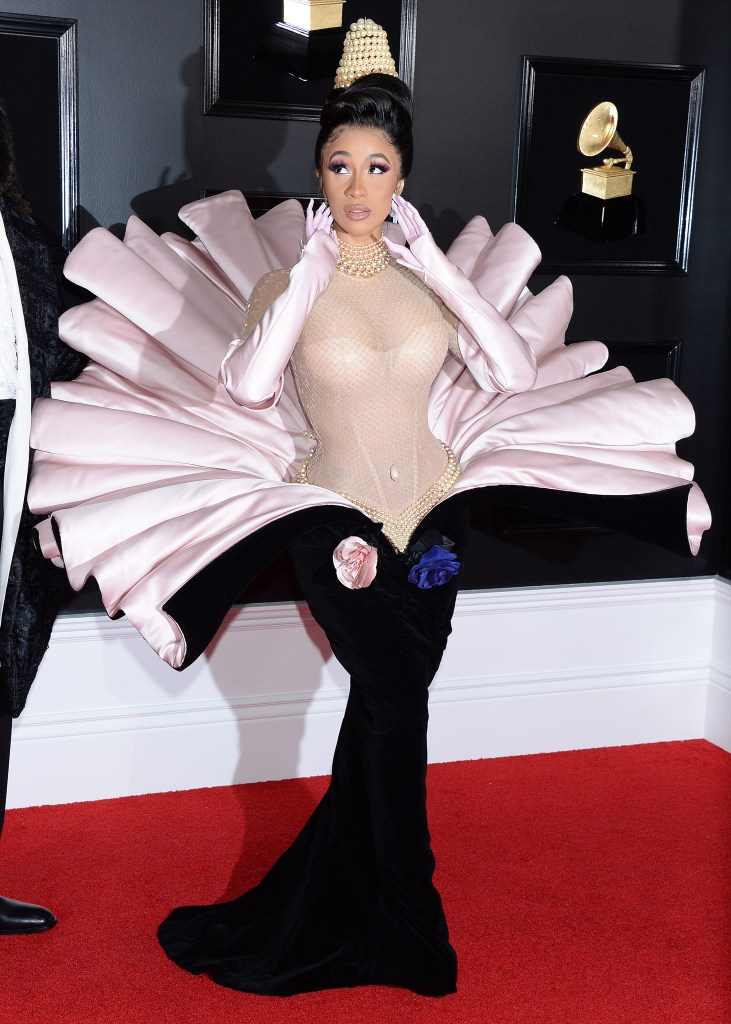 Cardi B wears vintage 1995 Thierry Mugler at the Grammys.  Broadimage/REX/Shutterstock

Possibly her most dramatic red-carpet dress to date, Cardi B surprised everyone at the 2019 Grammy Awards in a vintage Thierry Mugler Venus sheath dress from 1995.

The fashion look was months in the making, starting in September 2018 when Cardi B’s stylist, Kollin Carter, direct-messaged the Mugler brand on Instagram. Carter and Cardi B were soon after invited to Mugler creative director Casey Cadwallader’s debut runway show the next month and visited his studio to look through the brand archives.

Carter was dead set on the Venus dress, stating to WWD: “From the moment I saw it, I knew it was going to be a debatable moment, some people would love it and some people would hate it and that’s everything we’re about when it comes to fashion. It’s meant to create a conversation.” 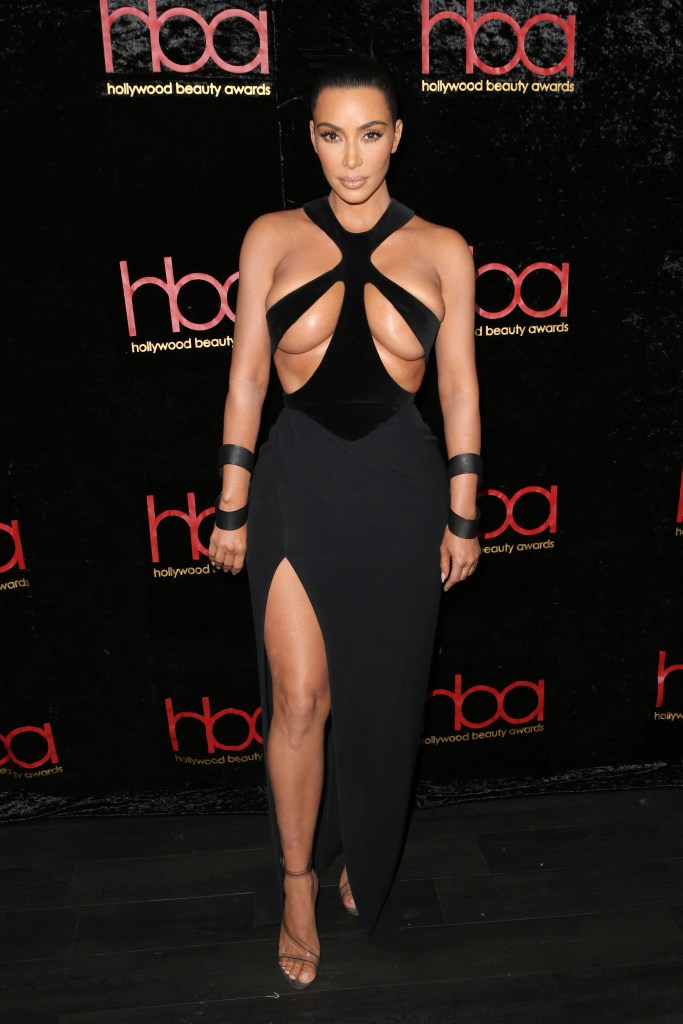 Never one to shy away from a risqué fashion moment, Kim Kardashian West took it up a notch for the Hollywood Beauty Awards, where she wore a bondage-inspired, vintage 1998 Thierry Mugler dress. The divisive look quickly circulated social media for its harness-like design and has become one of Kardashian’s most well-known looks.

The dress has even spawned knock-offs, notably by Fashion Nova released shortly after Kardashian first wore the dress. Kardashian voiced her disappointment over the fast-fashion retailer re-creating the look, taking to her Twitter account to post a lengthy thread squashing rumors that she was in on the retailer copying it. 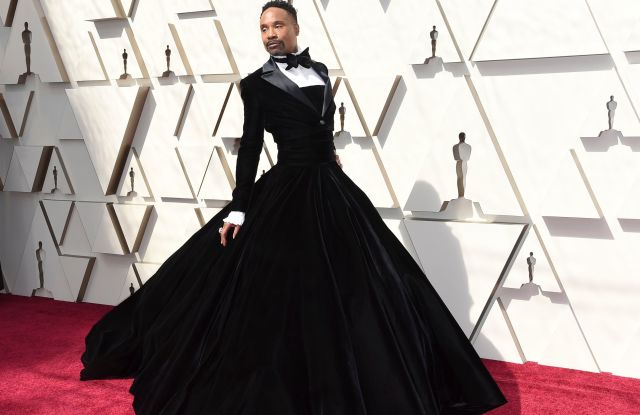 Billy Porter’s year of gender-bending, high-fashion-meets-costume looks had a number of highlights, but his Oscars gown quite possibly tops the list. The “Pose” actor — who made history at the 2019 Emmy Awards for being the first openly gay black man to win a lead actor award — arrived to the Oscars red carpet in a custom, hybrid tuxedo ballgown by Christian Siriano. The dress was one of the most dramatic styles on the red carpet, rivaling the buzz-factor of Lady Gaga’s 128-carat Tiffany yellow diamond necklace. 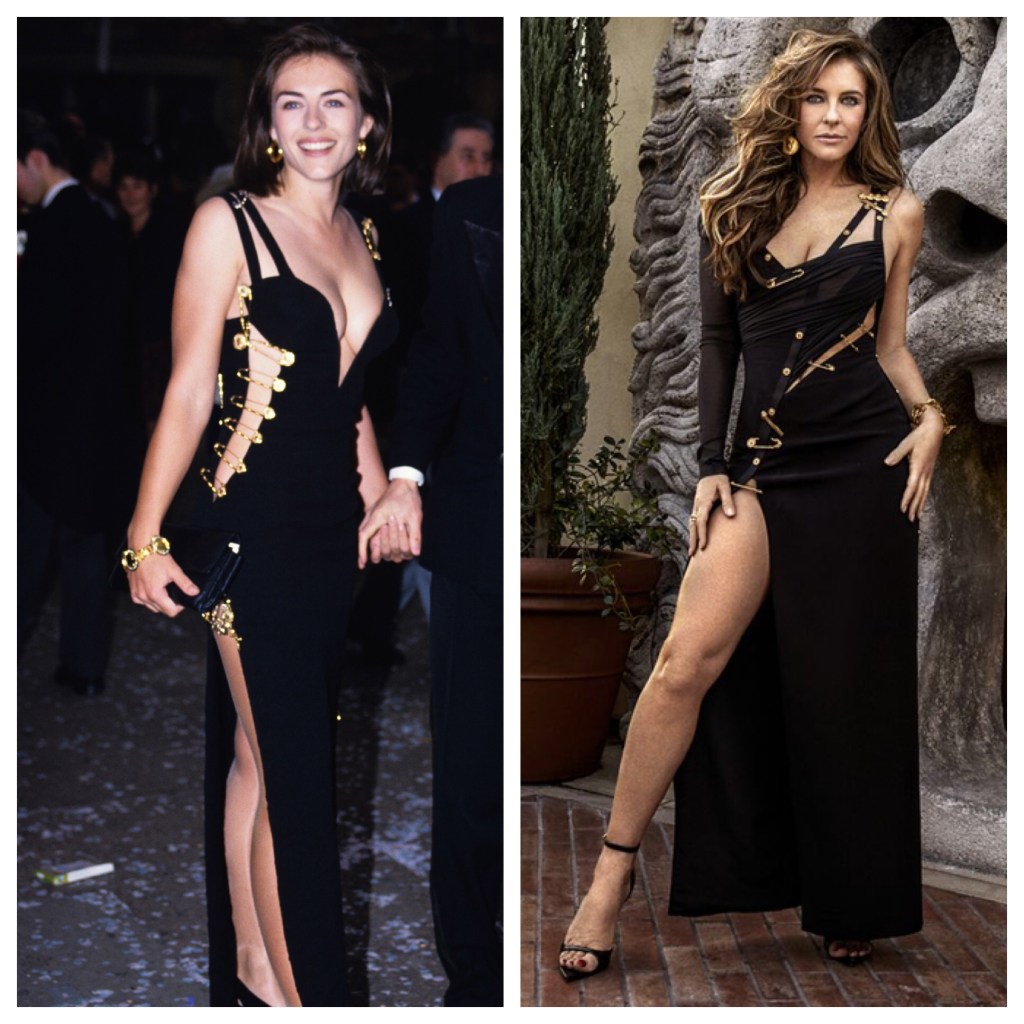 One of the most iconic dresses of all-time arguably was Elizabeth Hurley’s Versace safety-pin dress worn to the 1994 film premiere of “Four Weddings and a Funeral.” Twenty-five years later, Hurley appeared in the April issue of Harper’s Bazaar wearing a modernized version of the dress from Versace’s pre-fall 2019 collection. 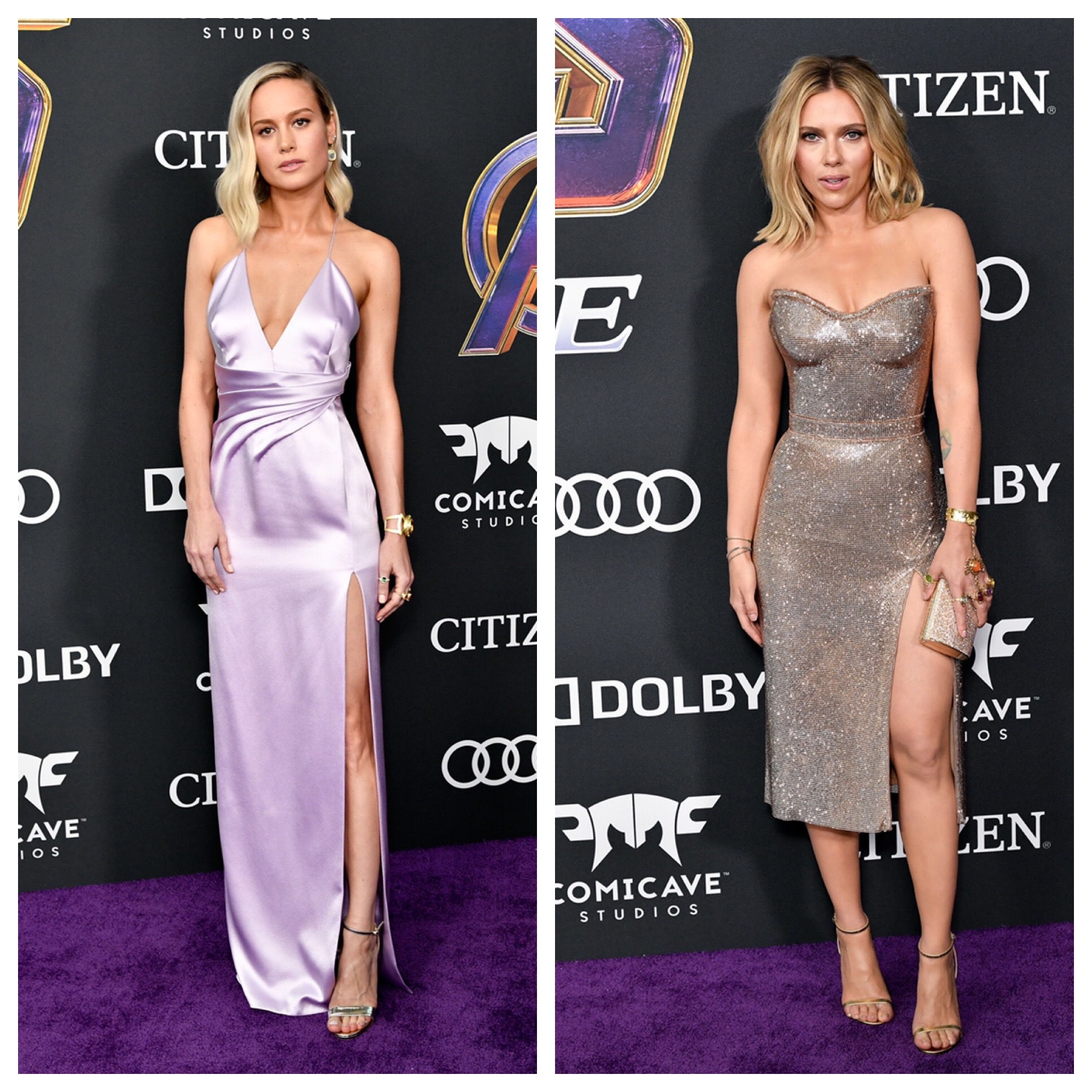 The premiere of “Avengers: Endgame” — the fourth and final “Avengers” film — was the end of an 11-year era for Marvel Studios, and actresses Scarlett Johansson and Brie Larson gave the saga a sartorial sendoff.

As any Marvel fan knows, the gauntlet holds the six infinity stones, which are red, orange, yellow, green, blue and purple. The actresses’ jewelry (Larson in Irene Neuwirth and Johansson in Sonia Boyajian) took after the stones, with each wearing five rings in the respective colors with a bracelet or chain in the last gem stone color.

Lady Gaga in Brandon Maxwell, May 2019 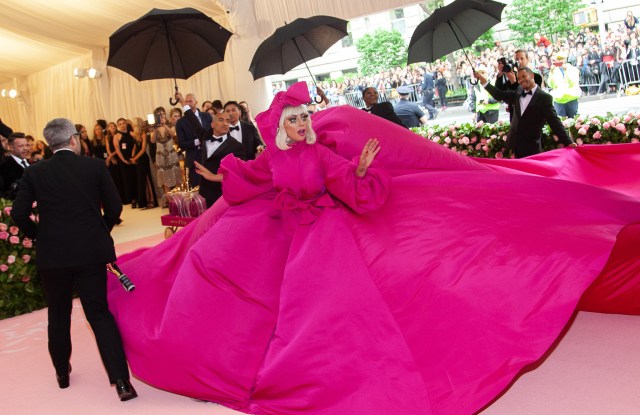 If anyone can embody camp, it’s Lady Gaga. As the co-chair of this year’s Met Gala: Notes on Camp, the Oscar winner made a grand entrance on the pink carpet, giving a campy performance (complete with four outfit changes) that gave a nod to the singer’s theatrical roots.

Gaga arrived in a billowing hot pink gown with a matching bow. After posing with designer Brandon Maxwell — who was responsible for all the looks — Gaga began undressing, revealing a black ballgown with a fitted bodice underneath.

Yet again, Gaga undressed, this time revealing a slinky hot pink slipdress, which she complemented with oversize black Linda Farrow sunglasses and a Nineties-era cell phone — which was actually a Judith Leiber bag. She finished off the performance by stripping yet again to reveal a crystal-studded black bra and matching underwear. 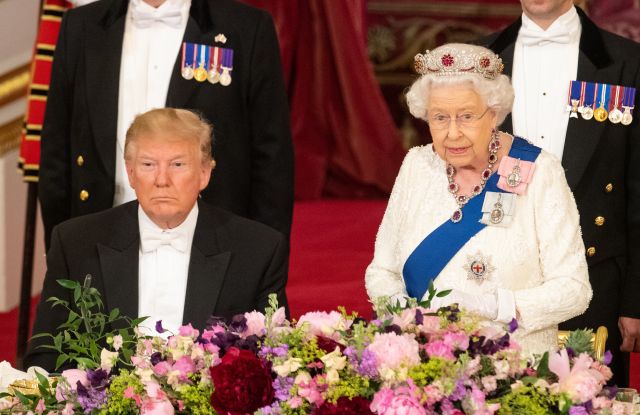 Was there a hidden message in Queen Elizabeth II’s ruby tiara during her state dinner with President Trump?

The Internet sure seemed to think so. For the dinner, the queen wore her Burmese ruby and diamond tiara, which she commissioned from the House of Garrard in 1973 with rubies she received as a wedding gift from the people of Myanmar (formerly known as Burma).

According to Garrard, the tiara’s 96 rubies have a symbolic meaning, as in Burmese culture rubies are said to protect against evil and illnesses. While Buckingham Palace never commented on the tiara, the queen has previously worn the tiara at other official occasions, including a state dinner in 2009 with India’s then-president, Pratibha Patil.

For Katie Holmes, it was just a weekday afternoon, but for the Internet, a new fashion trend was born.

Social media seemingly lost its mind when the actress stepped out in New York City wearing a loosely buttoned Khaite cashmere cardigan with a matching bra peeking out.

@katieholmes212 out in NYC in KHAITE CASHMERE yesterday.

Holmes’ look is arguably responsible for giving the cardigan a newfound cool factor. Case in point: the street style set at New York Fashion Week gave their own spin on Holmes’ look, wearing the garment in modernized styles. 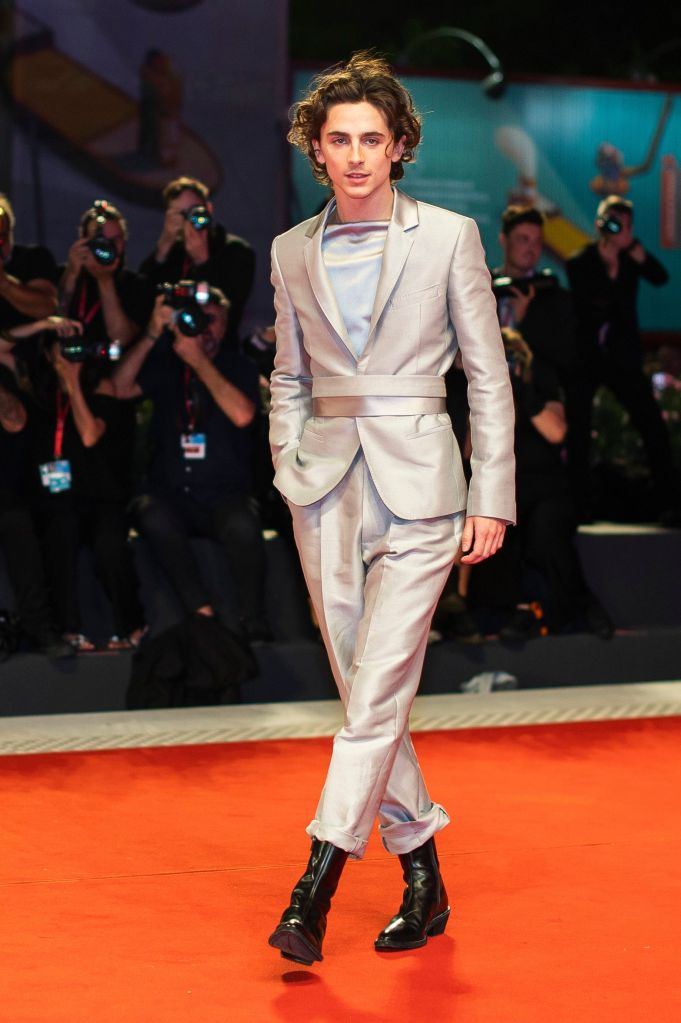 Timothée Chalamet at the Venice Film Festival in 2019.  Arthur Mola/Invision/AP/Shutterstock

This year’s Venice Film Festival red carpet proved that it can rival Cannes, thanks in large part to Timothée Chalamet’s now-legendary silver satin suit. The Oscar-nominated actor made waves in the Haider Ackermann-designed number at the premiere of his new film, “The King,” which he attended alongside Lily-Rose Depp, who also had a high-fashion moment in a pale pink Chanel gown.

Chalamet’s satin suit is just one of the high-fashion looks he’s sported this year. At this year’s Golden Globe Awards, he made headlines dressed in a Virgil Abloh-designed Louis Vuitton harness, then again in a graphic print Alexander McQueen suit at the Critics’ Choice Awards.

Kaia Gerber didn’t look far for inspiration for her 18th birthday party look. The model channeled her own supermodel mom, Cindy Crawford, choosing a bondage-inspired Versace look that resembled the outfit worn by Crawford at the 1992 MTV Video Music Awards. 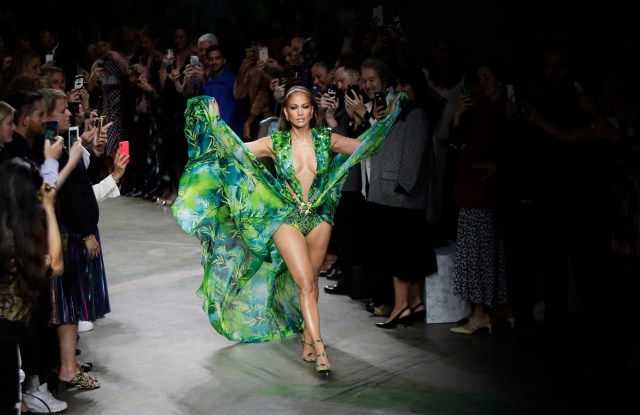 Jennifer Lopez shut down Milan Fashion Week when she walked the Versace spring 2020 runway, in a reimagined version of her iconic green dress, no less.

In a collection that surrounded the jungle print-theme of the iconic dress — which Lopez wore to the 2000 Grammy Awards — Lopez took the runway in an even more risqué version of the original dress, this time with short sleeves and cut-out details.

The original dress is known as one of the most iconic fashion looks of all time and was the impetus for the creation of Google Image Search.

“At the time, it was the most popular search query we had ever seen,” said former Google chief executive officer Eric Schmidt in a 2015 blog post. “But we had no surefire way of getting users exactly what they wanted. J­.Lo wearing that dress, Google Image Search was born.” 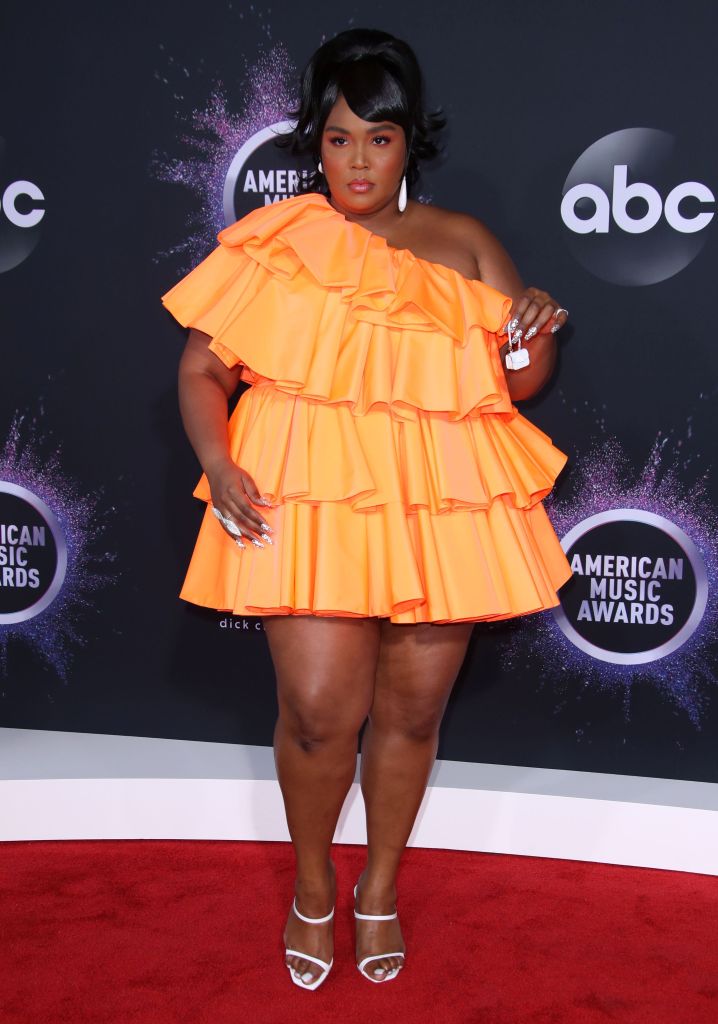 Lizzo at the 2019 AMAs  Matt Baron/Shutterstock

The singer, never one to filter her thoughts, later shared photos of the look on Instagram where she described the accessory as “bag big enough for my f—ks to give.”

The Biggest Influencer Controversies of 2019

The Biggest Moments from NYFW Spring 2020