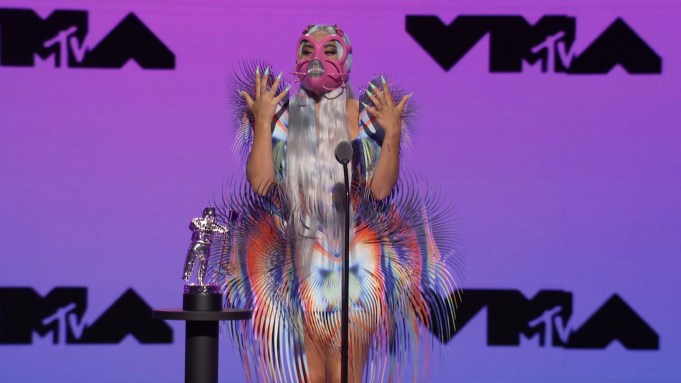 MTV put on an unprecedented hybrid in-person and virtual awards show for the 2020 VMAs, with performances staged across New York City.

The show, which was hosted by actress Keke Palmer, was initially scheduled to take place in Brooklyn’s Barclay Center. Of course, given the ongoing coronavirus pandemic, the ceremony shifted to its hybrid format.

From Lady Gaga and Grande’s debut performance of their hit collaboration, “Rain on Me,” and Miley Cyrus’ homage to her “Wrecking Ball” days to DaBaby’s commentary on police brutality and the Black Lives Matter movement, here are seven must-see performances from the 2020 MTV VMAs.

One of the most anticipated performances of the night was by Lady Gaga and Ariana Grande, who took the 2020 MTV VMA stage for their debut of “Rain on Me,” which won the award for song of the year, best collaboration and best cinematography.

Lady Gaga also performed a medley of songs from her new “Chromatica” album, including “Enigma,” “Chromatica II,” “911” and “Stupid Love.”

DaBaby took the 2020 MTV VMA stage to perform a medley of his hit songs, including “Peephole,” “Blind” and “Rockstar,” alongside dance group Jabbawockeez.

The rapper referenced the Black Lives Matter movement and police brutality during his performance, part of which he did while handcuffed in the back of a police car. He ended the performance while rapping on top of the police car, as visuals of the city burning displayed behind him.

Miley Cyrus is no stranger to the MTV VMA stage, most notably her risqué 2013 performance of “Blurred Lines” with Robin Thicke. This year the singer returned for a more subdued performance of her new single, “Midnight Sky,” which she sang under a changing colorful spotlight.

Cyrus ended the performance by paying homage to her 2013 music video for “Wrecking Ball,” by singing on top of an oversize disco ball.

The Weeknd opened up the 2020 MTV VMAs with a performance of “Blinding Lights” at the Edge at Hudson Yards, which is the highest observation deck in New York City.

The singer won two awards during the ceremony for video of the year and best R&B artist.

Latin artist Maluma staged his 2020 MTV VMA performance of his hit song “Hawái” at Brooklyn’s Skyline Drive-In theater to an audience sitting in their cars.

Maluma went on to win the award for best Latin artist.

The 2020 Emmy Awards Are Going Virtual