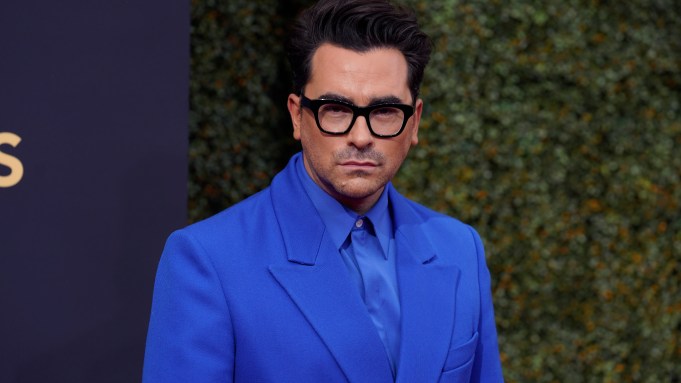 Male celebrities looked to nontraditional takes on formalwear for the 2021 Emmys, debuting looks that were remarkably fashion forward.

Levy, among other male celebrities, has been a leader in the growing world of men’s couture dressing, bringing fashion’s made-to-measure high art to the red carpet. He wore a lemon yellow suit from the Valentino spring 2021 couture collection (the design house’s first couture collection to include men’s styles) to the Golden Globes.

His custom Loewe suit for the 2021 Emmys consisted of tails, a white wing collar shirt and a floral brooch instead of a tie.

One of the night’s biggest winners, “Ted Lasso” star and creator Jason Sudeikis, ditched the hoodie he wore to this year’s Golden Globes, and instead wore a modern take on the smoking suit in head-to-toe blue velvet, designed by Tom Ford.

Click through the above gallery to see more of the standout men’s fashion from the 2021 Emmys.

How 13 Fashion Week Designs Looked on the Emmys Red Carpet