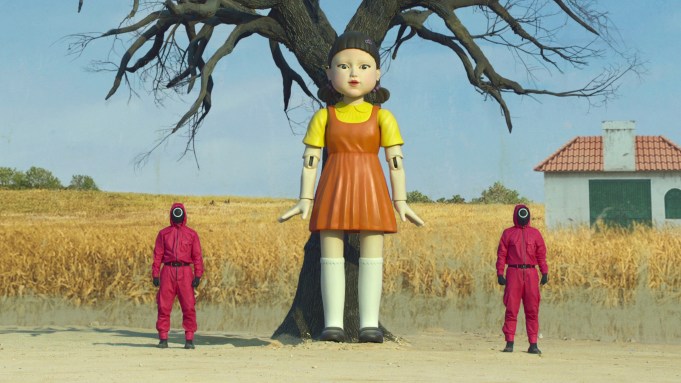 “Squid Game” — which was named the top-trending Halloween costume by Google in a recent report — follows a group of people in financial debt who compete in a deadly tournament of children’s games for a massive cash prize.

While the contestants’ green track suits are inspiring some upcoming Halloween costumes, Yandy is looking to the show’s guards for its “Met Your Match Watchmen” costume, which is a pink, long sleeve jumpsuit with a black waist belt and a breathable black face mask designed with a diamond emblem.

Although Britney Spears and her many looks from the ‘90s and early Aughts have long-inspired Halloween costumes, the singer is proving to influence even more Halloween costumes this year thanks to the increasing media attention surrounding her conservatorship legal battle against her father, Jamie Spears, and the subsequent #FreeBritney movement among her fans.

The fast-fashion retailer is offerings several costumes inspired by Spears’ most iconic performances, such as the “Imma Slay 4 You” costume, which takes inspiration from her 2001 MTV VMAs performance where she wore a green bikini and danced with a live python.

Click through the above gallery to see photos of the 2021 pop culture-inspired Halloween costumes.

19 New TV Shows, Movies and Documentaries to Watch in October 2021

BTS’ Louis Vuitton Grammys Looks Are Up for Auction