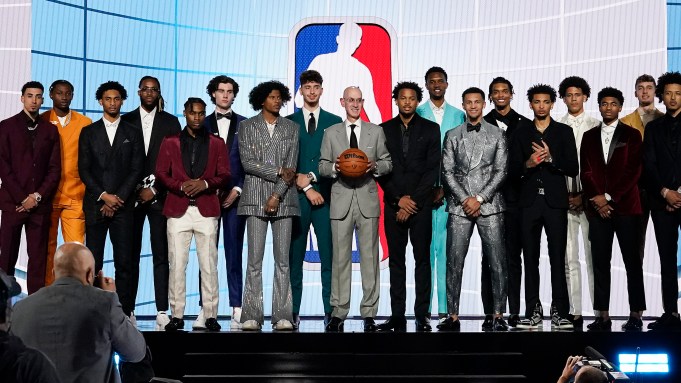 If there was ever a moment to make your fashion debut in the NBA, it would be draft day.

On Thursday, big names like Cade Cunningham, Jalen Suggs and Jonathan Kuminga dressed to the nines as they walked into Barclays Center in Brooklyn.

The first-round draft pick was Cunningham, a freshman point guard from Oklahoma State, who will go to the Detroit Pistons. Cunningham partnered with Neiman Marcus in picking out his ensemble. He wore a two-piece tuxedo suit from Isaia and black Christian Louboutin spiked low-top sneakers.

Davion Mitchell, the point guard from Baylor who will be heading to Sacramento to play for the Kings, also partnered with Neiman Marcus for the draft. Mitchell wore a jacket from Amiri, black button-down from Brioni, pants from YSL and black spiked Christian Louboutin loafers.

Though there were some many innovative takes on the classic all-white or all-black suits, some players opted for bright colors such as orange or baby pink, like Kuminga, who is originally from the Democratic Republic of the Congo and drafted from the G League, and Kai Jones, who played for the Texas Longhorns. Kuminga and Jones will play for the Golden State Warriors and Charlotte Hornets, respectively.

Evan Mobley, who played for the USC Trojans, wore a bright seafoam suit paired with white and black loafers. Suggs, a guard from Gonzaga, and Jalen Green, who came from the G League, chose gray suits with sparkly detailing, with Green’s suit reminiscent of the ‘70s with its bell-bottom feature. Mobley, Suggs and Green will play for the Cleveland Cavaliers, Orlando Magic and Houston Rockets, respectively.

Click through the above gallery to see some of the 2021 NBA Draft’s standout fashion looks from the night.

Celebrities at the 2021 NBA Finals: See All the Photos

When It Comes to NBA Fashion, It’s Not About the Clothes