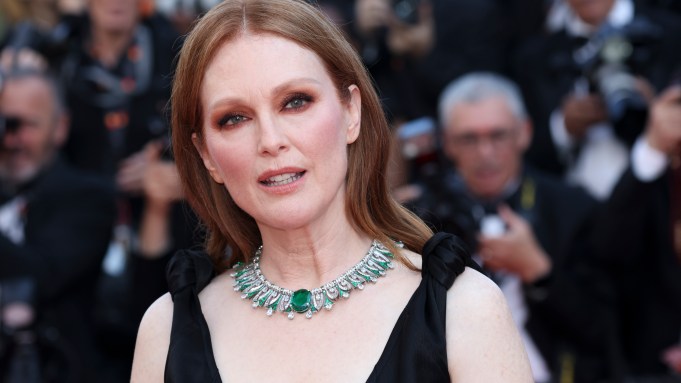 The Cannes Film Festival is celebrating its 75th anniversary this year with many of today’s biggest celebrities coming together at the event’s famous steps in celebration.

The 2022 Cannes Film Festival kicked off on Tuesday with the likes of Julianne Moore, Eva Longoria, Rebecca Hall, Lashana Lynch and others coming together for the opening ceremony. The festival opened with the zombie comedy film, “Final Cut” and awarded actor Forest Whitaker with the lifetime achievement award.

For the opening night, many celebrities looked to luxury fashion houses for their red carpet looks. Moore opted for a plunging black drop-waist dress by Bottega Veneta, which she paired with Bulgari jewelry. Moore’s lavish necklace is dubbed the “Tribute to Paris” and is meant as an homage to the city’s arts and culture. The necklace is made with a Colombian 35-carat emerald and is embellished with more than 50 pear-shaped diamonds, over 460 buff-top emeralds and over 300 fancy shape diamonds.

The rest of the 2022 Cannes Film Festival, which runs until May 28, will see the debut of some of the year’s most anticipated films, such as Baz Luhrmamn’s “Elvis,” the “Top Gun: Maverick” sequel and George Miller’s “Three Thousand Years of Longing” starring Tilda Swinton and Idris Elba.

Here, WWD rounds up the 2022 Cannes Film Festival red carpet looks you need to see. Click through the above gallery to see more and check back for daily updates.