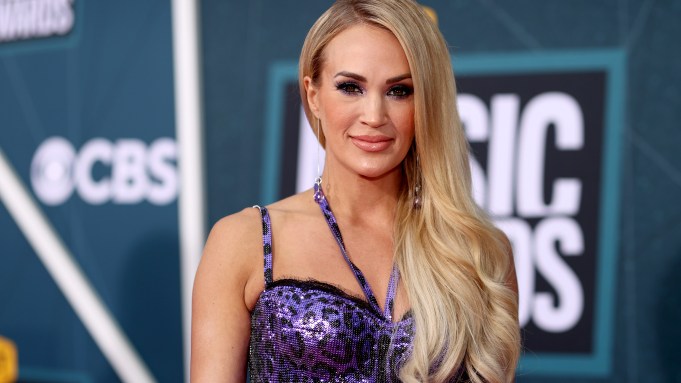 The fan-voted show saw the likes of Carrie Underwood, Maren Morris and LeAnn Rimes, among many others, walk the red carpet of the ceremony, which was held in Nashville, Tenn.

Actor Anthony Mackie, best known for his role as Sam Wilson aka Falcon in the Marvel Cinematic Universe, and singer Kelsea Ballerini cohosted the awards show together. However, hours before the show started, the musician revealed she had tested positive for COVID-19, and would still be hosting virtually from her home.

Morris wore a two-piece look by Rasario, which featured a silver embellished bralette top and a high-waisted bright red skirt with a long train. She kept her makeup simple with a nude lip and styled her hair in loose waves.

Despite her positive diagnosis, it didn’t stop Ballerini from getting glammed up and being part of the red carpet as well. Styled by Molly Dickson, she wore a white three-piece suit by Michael Kors, which featured a bejeweled silver bralette.

Mickey Guyton channeled old Hollywood glam with her goddess-like, formfitting white dress by Reem Acra, complete with a plunging neckline and sequins designs throughout. She wore her hair in a side part with a pearl clip.

Rimes wore an ethereal, white gown by Georges Chakra, which featured asymmetrical and cutout designs throughout.

Miranda Lambert wore a long-sleeve dark blue minidress with a plunging neckline. The singer also performed “If I Was a Cowboy,” her lead single from her upcoming album “Palomino,” which will be released later this month.

The stars from Netflix’s hit show “Queer Eye” were also in attendance. Antoni Porowski wore a dark purple suit with a pink undershirt from Valentino’s spring 2022 collection, while Tan France wore a bold suit by Germanier from its fall 2022 collection. Bobby Berk wore an all-black suit and Karamo Brown wore a black coat over a blue linen shirt, asymmetrical jeans and cowboy boots.

Click through the gallery above to see some of the standout fashion moments from the 2022 CMT Music Awards red carpet.