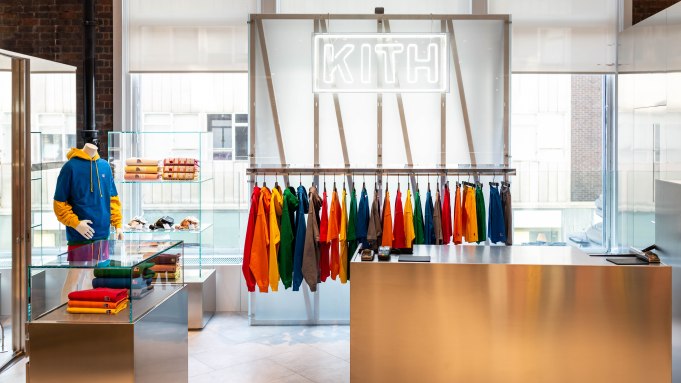 LONDON — With new exhibitions, shop and restaurant openings in full swing this summer in London, give yourself a reason to step outside of the Shoreditch venues this fashion week with these nine new haunts.

1. Take a look inside the life and mind of late director Stanley Kubrick at the Design Museum’s retrospective, which runs until Sept. 15. The exhibition includes costumes and illustrations from “Spartacus,” “A Clockwork Orange” and “2001: A Space Odyssey,” including the original dresses and shoes worn by actresses Lisa and Louise Burns, who played the twins in “The Shining.”

3. Matchesfashion.com is celebrating Paco Rabanne’s signature chain-mail design with an immersive installation, set at its 5 Carlos Place town house. The space features digital displays that tell the story of the brand’s craftsmanship throughout the years and also stocks a series of reinterpretations of the label’s famous paillette-embellished 1969 baguette bag and minidresses.

4. Lifestyle brand Kith has opened its first international outpost in Selfridges Designer Street Room. You’ll find a lot of brand signatures in the space such as illuminated marble floors, glass fixtures and walls filled with Jordan sneaker casts. The full Kith x Russell collection is available in the store, as well as the brand’s much-loved cereal bar Kith Treats.

5. The Royal Academy’s annual summer exhibition opened earlier this week. As the world’s largest open-submission art show, it allows you to become immersed in the creativity of the art world and experience works from artists such as Tracey Emin, Jock McFadyen and Grayson Perry alongside new and emerging talent. Pieces come in various forms of media, from paintings to large-scale sculptural installations.

6. Feast on hearty rice-based dishes in Fitzrovia as Michelin-star chef Quique Dacosta brings paella to the fore with new restaurant Arros QD, which opens June 7. Restaurant goers can watch their paella of choice being cooked on an 8-meter flame grill while sipping on cocktails inspired by Mediterranean cities and locally sourced botanicals.

7. Indulge in twice-baked lobster soufflé and golden pearl caviar in Scott’s Restaurant’s new Platinum Arowana Room. The private dining room has been lavishly fitted with 6 million pounds worth of artwork, furniture and accessories, making it the home of the world’s most expensive restaurant interior. Among the pieces featured are paintings by Chagall and Pissarro as well as Lalique lighting and Baccarat glassware.

8. The gin craze that swept through the 18th century is back and gin bars are popping up left, right and center. For the authentic experience, head to the East London Liquor Company near Victoria Park, where gin is created directly on site from large copper stills. The independent distillery prides itself in serving quality classics such as gin sours and negronis.

9. Relax in between shows and head to The Gibson bar, just a stone’s throw from the Truman Brewery. It makes for a steamy hot spot over the weekend with its jazzy vibes and delicious drinks. Choose original gin creations such as “A Monkey Gone to Devon” or a “Tea Time With Alice.”