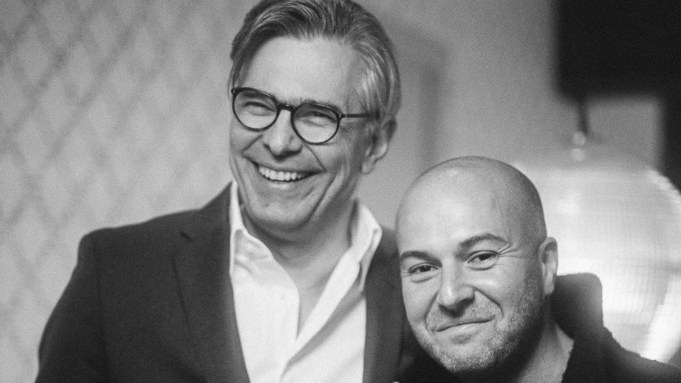 “We are confident this will be a huge success, mainly because we have received an enormous support from the industry. Brand partners have been enthusiastic. Customers have been supportive, with a lot of requests over the past two years to add men’s-wear,” Kliger said. “And our friends from the press [too], and I hope it does not stop tonight.”

“We approached spring 2020 assuming that we were about to enter a new era in men’s wear, in terms of point of view but also in terms of customers,” said men’s wear buying director Chris Kyvetos, who explained the thought put into the capsule. From revisiting Prada’s iconic looks from 2000 to showcasing the continued relevance of Miuccia Prada’s designs two decades on, albeit with some updates to shapes. For Valentino, “we used some of Pierpaolo [Piccioli’s] iconic skate-cut and sport-running trousers and integrated them into a collection of suiting, for a modular tailored wardrobe. You own two or three pairs of trousers and one jacket for a modern way of wearing suiting,” he said. As for Thom Browne, it was an exploration of the designer’s belief that tailoring wouldn’t be the same, post-streetwear.

Beyond these three launch capsules, customers who visit the site beginning Jan. 27 will be able to snag pieces from 120 names “authentic and significant voices in men’s wear,” said chief commercial officer Richard Johnson. Among those will be heavy-hitters like Balmain, Raf Simons and Junya Watanabe as well as rising talents like Casablanca, Wales Bonner or Nanushka.

“A lot of e-commerce sites now have huge brand portfolios, expansive amounts of product. In our view, when you offer everything, you offer nothing at all because you have no point of view,” he said. “We were clear from the beginning [that] the key point wasn’t so much what can we sell, it is what is our point of view. We knew that we had to be very distinct. We felt [when the project started two years ago] that the sea-change in fashion was due. It was peak streetwear and in our view, it was going to be a more tailored point of view. A couple of years down the line, this is validated and the zeitgeist is certainly moving in that direction,” he added, noting that streetwear wasn’t dead but had become part of the men’s wear vocabulary. “The whole new generation of customers is interested in what comes next.” Less than a week to go before finding out.