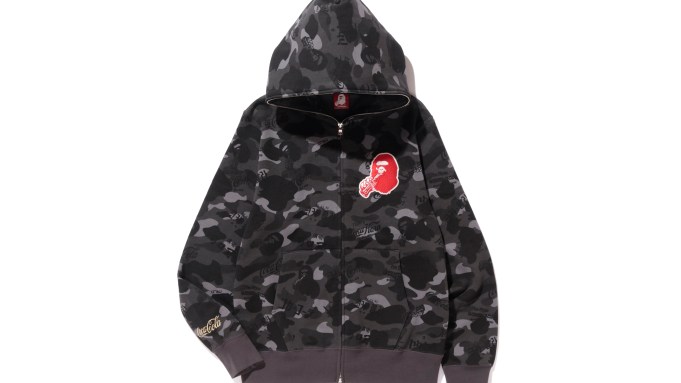 TAKE TWO: Japanese streetwear brand A Bathing Ape — better known as Bape — has teamed with Coca-Cola on a men’s clothing capsule line that includes apparel, accessories and home goods. It will launch later this month.

The A Bathing Ape x Coca-Cola 16-piece collection is comprised of T-shirts, long-sleeved shirts, a hoodie, caps, hats, bandanas and a backpack. The range is done in hues of gray, black, white and red, with some pieces covered in Bape’s signature camouflage pattern or bold graphics featuring the streetwear label’s Baby Milo and Bape head. In addition, the line includes a kitchen apron and a glass tumbler.

This is the second collaboration for the streetwear label and the soft-drink company. They had teamed in 2014 on a range that included T-shirts, polo shirts, a hoodie, G-Shock watch, cap, yo-yo and drinking glass. Bape has collaborated previously with brands such as Converse, Supreme, Marvel and Disney.

Earlier this week, the Japanese streetwear brand posted a teaser on Instagram, which featured the label’s ape head drinking a bottle of Coke.

A Bathing Ape was launched in 1993 by Tomoaki Nagao, also known as Nigo. Hong Kong-based fashion firm I.T Group purchased the brand in 2011, and Nagao stepped down from the company one year later.