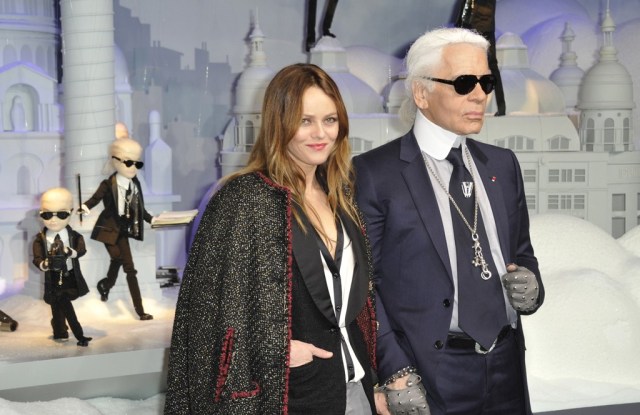 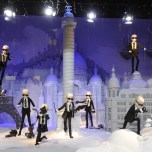 A CHANEL CHRISTMAS: Several hundred people gathered in front of Paris department store Printemps Wednesday afternoon to catch a glimpse of Karl Lagerfeld and Vanessa Paradis, who came to inaugurate the store’s Chanel-themed Christmas window displays. The pair joined Printemps owner Maurizio Borletti, Printemps chairman and chief executive officer Paolo de Cesare and Bruno Pavlovsky, president of Chanel fashion, for the ceremony, which started 45 minutes late. Lagerfeld posed in front of a display that showed a dozen puppets in his likeness prancing over Paris landmarks such as the Eiffel Tower and the Vendôme column. At the cocktail afterwards, the designer recalled his mother’s “divine” Christmas celebrations, which involved three weeks of preparations and a 20-foot tree. “I prefer to be the Santa Claus than to get the gift,” Lagerfeld said. “I start to buy Christmas gifts already sometimes in June and July. My big problem is to keep them, not to give them away before.”

Up next for the multitasker is the Museum of Modern Art’s Film Benefit in honor of Pedro Almodóvar, to be held Nov. 15 in New York, which he is co-chairing with Anna Wintour.

Paradis said her favorite childhood Christmas memory was a family trip to the Indian Ocean island of Réunion when she was 7. “It was the first time my presents were under a palm tree and not under a fir, and I spent December 25 with my feet in the sand,” she recalled. Paradis has been filming back to back in recent months, wrapping first “Cornouailles” (“Cornwall”) with director Anne Le Ny and then “Je me suis fait tout petit” (“I kept a low profile” in English) with Cécilia Rouaud. Now she is back to thinking about music. “I’m writing songs, quietly,” she said.