A First Look at L.A.’s New Men’s Shop The Optimist

The store, with hours between 11 a.m. to 7 p.m. from Monday to Sunday, opens inside Platform tomorrow.

Joseph Miller and David Fishbein have opened a men’s store at Platform, the shopping and dining experience in Culver City, Calif., that the two created in 2016 via their real estate company, Runyon Group. The Optimist, as they’ve called it, officially opens its doors Friday.

“About a year ago, we got to this point where we couldn’t find a men’s wear store that we were excited about anymore,” Fishbein said. “Everything is streetwear with these crazy appliqué bomber and drop-crotch pants. Or it was the opposite end where it was super conservative. There was nothing really speaking to the L.A. guy. We were like, since no one else is doing it out there, maybe we need to be crazy and get into the retail business ourselves, even at a time when everyone is trying to leave the multilabel industry.

“Now at three-and-a-half years old, Platform has really come into its own where we’ve seen retail sales honestly go triple in the last year and a half,” he continued. “And that’s taking place at the same time while retail globally is going through this completely huge change, where brands you never thought would have issues are all of a sudden filing for bankruptcy. Brands that have been heritage brands for years and years are all of a sudden losing favor. Meanwhile, we are here trying to build up this new neighborhood and trying to figure out what pieces we can put in here that continue to grow [Platform] and make it a very special part of the L.A. community.”

Considering that retail climate, why open a brick-and-mortar?

“People have become so technologically dependent, the Amazons of the world,” he said. “There’s so many convenient and amazing things that technology brings, but you are kind of losing that personal touch point. We still think that brick-and-mortar is the best place to do that. It’s also a big reason that Joey and I focus so much on our staff and the hospitality element of the store. It’s not just about having really cool product and displaying it nicely. How do we make you feel when you come into the store? How are you greeted? Do you feel comfortable like this is a place where you want to spend time regardless whether you’re going to drop a lot of money? We just want you to feel like this is your club house.” 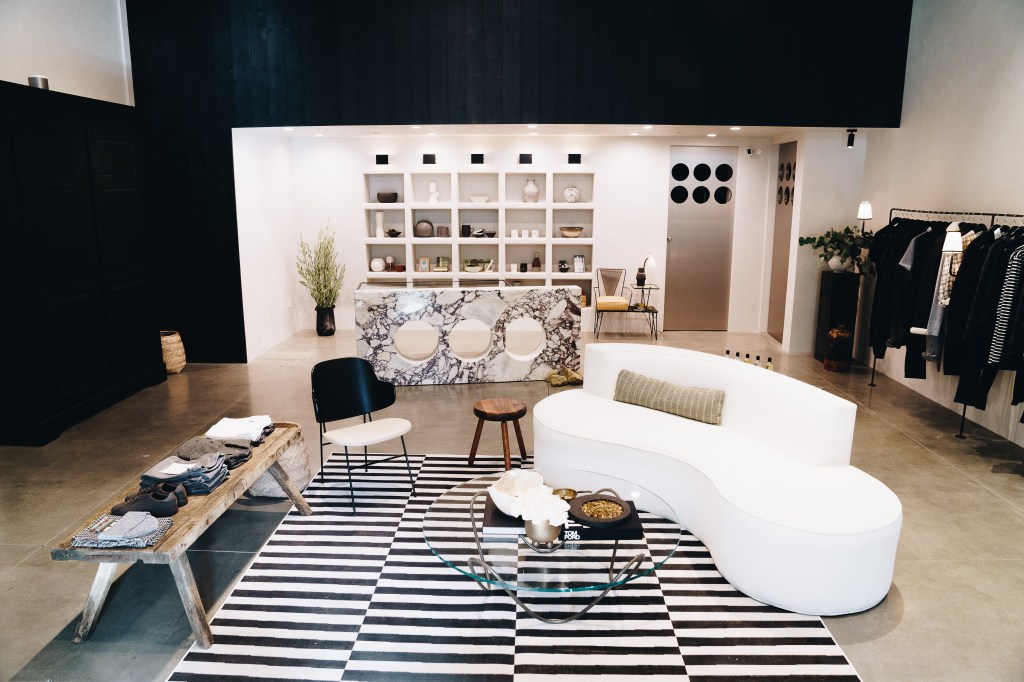 As Platform continues to grow, The Optimist is the first of the many new concepts the duo is working on. Other initiatives include projects in food and wellness. They’re building a new office building down the street that will bring the entire Platform neighborhood to five acres and a quarter of a billion dollars in development by the time it’s completed, in about three to four years, Miller said.

“Before anyone thought that this was a successful place, we thought it was,” Miller said of Platform. “We thought it would do well. So, we tried to buy up as much as we could.”

The Optimist is a passion project of sorts, they shared, and they traveled the world with stylist Julie Feingold, to bring back international pieces from France, Italy, Mexico and England. (Feingold is also helping with an in-store styling service.) There are more than 20 exclusive labels, ranging in price generally between $60 and $1,800, that are not found anywhere else in the U.S.

“Clothes are kind of country-less and borderless,” Miller said. “Good style is good style. And we wanted to find things from all over that spoke to us and spoke to this vision we wanted. By going further out we were able to find things that people would be coming here and uncovering for the first time.”

“We wanted to go to that L.A. guy that cares about fashion, cares about trend but most importantly cares about style and having stuff that is going to be consistently relevant in their wardrobe versus something they can wear for a few months,” Fishbein added. 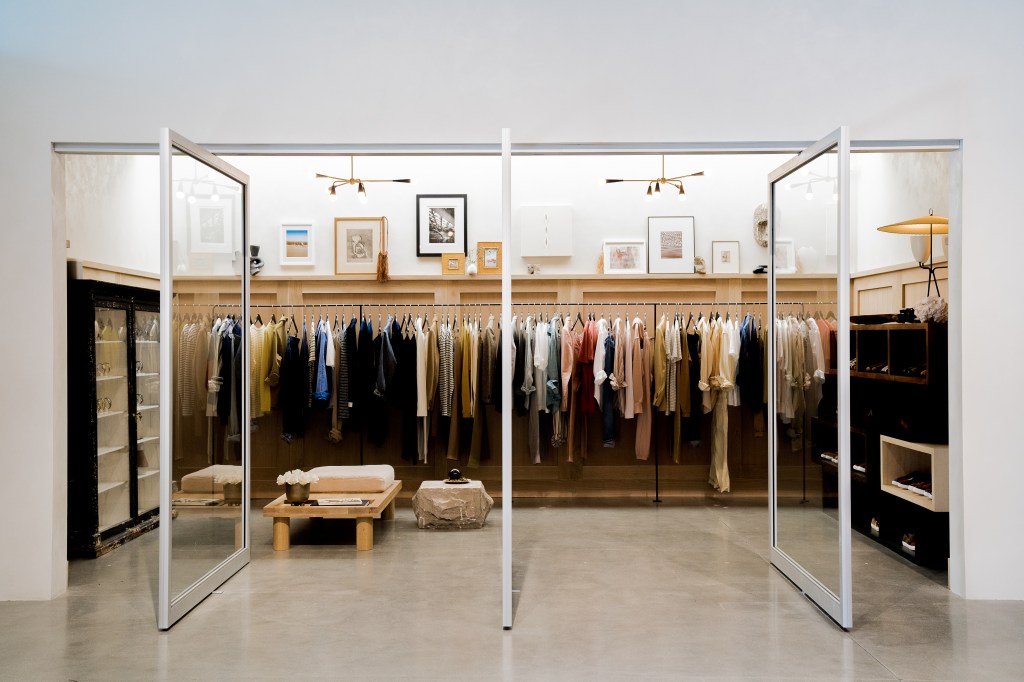 From the clothing to the furniture, everything in the store — which was designed by Jeremiah Brent — is shoppable.

“It’s the idea of putting together what an L.A. lifestyle looks like from the interior design to the clothing that you wear to the scents to the optical to the watches,” shared Miller. They’re providing vintage watches, priced between $800 and $5,000. “It’s not a bunch of new stainless-steel Rolex watches. It’s super interesting watches that have lived a life. And instead of being presented in a dusty old vintage storeroom, they are presented in this context with all of the clothes, all of the furniture as one sort of idea about what Los Angeles living looks like in 2019 and beyond hopefully.”

The entire endeavor has been fulfilling, they said.

“It’s been the whole journey of diving into something you have no idea about and is completely foreign,” Fishbein said. “You can totally flop on your face, and that’s still a huge possibility. This still can flop on its face.…Things are still unknown. But that unknown nature has always been something that’s been exciting to us of going someplace where nobody else has gone.” 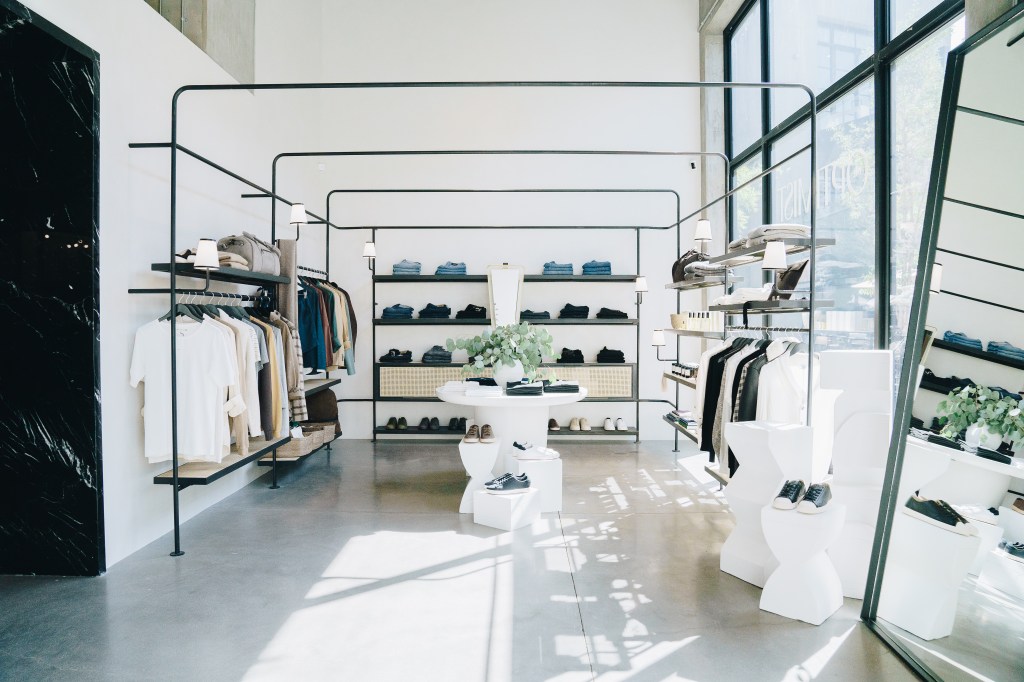