Mark Ronson said he got hooked on fashion... Antonio Marras is working on a big project... Partisanship has paid off for Barneys New York... 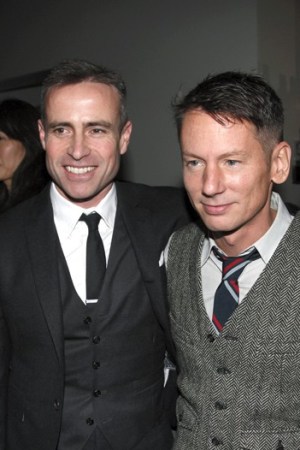 A GUY THING: In between production of a Rumble Strips album and a remix of King of Leon works, music meister Mark Ronson took a day off to attend the Gucci show — given his newfound passion for clothes. Wearing a slim brick-brown corduroy suit, Ronson said he got hooked on fashion more than a year ago when he did a shoot for GQ. “I said to myself, ‘I want to start dressing like that!’”

Speaking of GQ, the magazine’s party Saturday gave designers a chance to unwind, and catch up with each other. Thom Browne, for example, was locked in conversation at the bar with Italo Zucchelli of Calvin Klein Collection. “I’ve never been [in Milan] during this week before,” said Browne, in town to launch Moncler Gamme Bleu. “It’s exciting and so different from New York.” Zucchelli, who for this season is showing in New York instead of Milan, said, “It’s so nice to be here without having to show, and be able to just see my friends. But get ready for New York….” Angela Missoni came with her husband and sometime design inspiration, Bruno Ragazzi. “Can he be in my picture? Because it’s the men’s season, after all,” she said to a photographer. Designers Nick Hart, Brian Atwood of Bally, Ennio Capasa of Costume National, Massimilliano Giornetti of Salvatore Ferragamo and Graeme Fidler of Aquascutum also made appearances.

This story first appeared in the January 21, 2009 issue of WWD. Subscribe Today.

PIECES OF EIGHT: Antonio Marras, who, in addition to his namesake brand, is also creative director of Kenzo, is working on a big project. The Sardinian designer, known for his theatrical runway sets, will add a fashionable touch to the upcoming G8 political meeting scheduled to be held in July on the Mediterranean island of La Maddalena, off the coast of Sardinia. According to sources, Marras will be in charge of designing the suites where President Barack Obama and other heads of state will be lodging, in addition to common areas at the G8.

BARNEYS’ ENDORSEMENT: Partisanship has paid off for Barneys New York. The retailer, which wore its choice for president on its luxurious sleeve prior to the election, could hardly contain itself Tuesday when Michelle Obama wore an Isabel Toledo ensemble to her husband’s inauguration. “Dawn Brown, our vice president of public relations, called me from the inauguration saying, ‘Get the Isabel Toledo in the windows,’” said Barneys creative director Simon Doonan. “Ruben [the designer’s husband] and Isabel are scrambling to get us samples. It’s going to be an Isabel Toledo homage. I’m sort of annoyed that Michelle Obama has spring merchandise before us.” The retailer carries Toledo’s collection exclusively in Manhattan. Michelle Obama has a relationship with her hometown Barneys in Chicago. “Both she and her husband were customers at Barneys before he became a candidate,” Doonan said. “She wore a Barneys New York Collection suit when he got the nomination. She’s a Barneys girl.”

HUDSON RIVER FLIGHT TRIBUTE: Kenneth Cole is ever a fan of do-gooders, billboards and puns, all of which he combined in a tribute to the US Airways flight that landed safely in the Hudson River last week. On Tuesday morning, the designer put up this billboard on the West Side Highway: “In tough times, some land on their feet (others on the Hudson). — Kenneth Cole. Thank you to the pilots, crew, and N.Y.ers for all that you did, and all that you do.”

SHIRT TALES: Vogue Italia editor in chief Franca Sozzani hosted an intimate presentation for new London-based T-shirt label Doodski on Tuesday evening in Milan at sister Carla’s boutique, 10 Corso Como. “Each T is reversible so you can turn it over if you spill spaghetti on it,” said Swiss-born designer Andrea Sabrier of the summer 2009 collection, inspired by Romonov Russia. Diesel founder Renzo Rosso stopped by to check out the new competition, while socialite Beatrice Borromeo had other ideas. “[The T-shirts] are perfect for stealing from your boyfriend,” she said, motioning to her beau, Pierre Casiraghi.

FOR PETE’S SAKE: Pop Artist Sir Peter Blake showed a retrospective of collages and tracings at Milan’s Galleria Lorenzelli alongside Woolen Mills’ fall men’s collection during Milan Men’s Fashion Week. “It’s an interesting combination,” he admitted. The artist said he had been busy recently, designing the carpets for the new revamped Law Lords building in London; a fabric for Stella McCartney — of a crowd scene; a T-shirt for Marni, and a tapestry for The Rug Co.

FAN MALE: Inter Milan soccer stars Luis Figo, Francesco Toldo and Julio Ricardo Cruz warmed the benches at Versace’s show Monday night. “Soccer may not be for everyone, but fashion surely is,” said Cruz, adding that Donatella Versace was “a very strong” Inter fan. Figo, a former teammate of David Beckham’s during his spell at Real Madrid, said he was looking forward to meeting his old pal, who is now on loan from the L.A. Galaxy at Milan rivals AC Milan — on or off the pitch. “I haven’t seen him yet, but I would like to,” Figo said.

SHOP TALK: Domenico Dolce and Stefano Gabbana said before their D&G show Tuesday that they are working on a new store concept that will reflect the evolution of their second brand. “Ever since we took production in house [in 2006], D&G has become a full-fledged ready-to-wear line,” said Gabbana. “It has changed with us, with fashion and the market,” said Dolce. The concept will be unveiled in September and the first boutiques to be renovated are the Milan, Paris, London and New York units. The designers are keeping the details about the blueprint under wraps.

Meanwhile, Dolce & Gabbana is sponsoring a spring exhibition of Vogue photography created and curated by American Vogue and designed by Jean Nouvel at Milan’s Palazzo della Ragione. The show, “Extreme Beauty in Vogue,” with images by Edward Steichen, Erwin Blumenfeld, Richard Avedon, Helmut Newton, Annie Leibovitz and Steven Klein, among others, and an entire section dedicated to Irving Penn, will run March 4 to May 10. Gabbana said the images “are real icons because they have extended the boundaries of beauty beyond all rules.” Plans for the exhibition were announced on Monday by Milan mayor Letizia Moratti. Among the city’s other art projects for the year are a tribute to the late designer Gianfranco Ferré and a Vanessa Beecroft exhibition.

KORS HITS PALM BEACH: They say to go to where your customer is, and luckily for Michael Kors, his ladies are in Palm Beach. As the rest of New York froze on Friday, the designer treated his favorite clients, including Pauline Pitt, Jane Churchill and Jamee Gregory, to a brunch and spring trunk show at his Worth Avenue store. Hilary Ross helped host in honor of the Preservation Foundation of Palm Beach. Guests were shopping eagerly, Kors said, but “the days of ‘I’m only going to wear it in Palm Beach’ are on the wane.…But, of course, it’s Palm Beach, so everyone fights over the same garments.”

ALL CHANGE AT DOVER STREET: The London multibrand emporium Dover Street Market unveiled its spring collections Friday, and quite a crowd gathered to witness the event. A long line of artsy types snaked along the outside of the store from early in the afternoon, all waiting for Nigo, the founder of the Japanese label A Bathing Ape, who was due to sign copies of his “A Bathing Ape” book that evening. The designer was set to put in an appearance, as one of the major spring installations in the sprawling, five-story store is a replica of Nowhere, the store that Nigo and Jun Takahashi opened in Harajuku, Tokyo, in 1993. The Nowhere space in Dover Street Market will carry designs by Takahashi’s brand Undercover and A Bathing Ape, alongside products the two designers have collaborated on.

And plenty of other designers have set up quirky spaces in the store to carry their spring wares, too. Peter Jensen has worked with set designer Shona Heath to create an upside-down city skyline installation in the store, made from Perspex skyscraper shapes suspended from the ceiling. The space houses six tiered dress designs that Jensen has created exclusively for Dover Street Market, all made from a patchwork of different prints taken from the designer’s archives. The dresses retail from 700 pounds, or $1,032. Meanwhile, in Lanvin’s area mannequins clad in the house’s designs are sat in front of giant iMacs, as if they’re in an Internet cafe, while the founders of the London restaurant and design collective Les Trois Garçons have taken over the store’s shoe area. They’ve used the space to sell an eclectic mix of Perspex bags, rustic wooden chairs and candy-colored glassware, all artfully placed amongst the store’s Nicholas Kirkwood and Bruno Frisoni shoe designs.

HOMESPUN HIP: Pendleton, the hundred-year-old Pacific Northwest purveyor of Indian trading blankets and plaid wool shirts made famous by the Beach Boys, is the latest classic American company to be anointed by the cool kids at Opening Ceremony. The store’s co-owners, Carol Lim and Humberto Leon, have tapped the American heritage brand for their latest design collaboration, Pendleton Meets Opening Ceremony, which will launch for fall.

Lim and Leon, who have worked with brands such as Tretorn and Stetson in the past, were turned onto Pendleton when they started stocking the label as part of Opening Ceremony’s current Japanese feature. “It’s no secret that American heritage is a big reference in Japan,” says Leon. “We felt like as were trying to represent these Japanese designers it was important to also have a little focus on the American portion of it and Pendleton was definitely one of the first brands we wanted to embrace.” In honor of the firm’s 100th anniversary, Lim and Leon decided to take things a step further with the capsule collection, which features 15 men’s pieces, all of which will be available in women’s sizes and eight women’s pieces, which will hit stores in August. Designwise, Leon says they wanted to put the Opening Ceremony spin on Pendleton’s rustic heritage. Thus, the classic men’s shirt is done in a mash up of plaids and the Navajo blankets have been refashioned into a mini bell skirt and cropped motorcycle jacket. There will also be a home component of pillows and blankets and everything, as Leon says, is “ all wool, all made in the USA.” Hipsters will be keeping warm next winter.