It’s easy for one to get stuck thinking about the past, even obsessing over it, but that wasn’t a trap Hubert de Givenchy ever fell into.

Although the legendary designer, who died March 10 at the age of 91, achieved wide success soon after launching his own couture boutique in the early Fifties — aided in part by his high-profile and lasting friendship with Audrey Hepburn who famously wore exclusive Givenchy designs in some of her most beloved movie roles — Givenchy refused to pine for that time.

“I am of tradition, but that doesn’t mean I have an old outlook on life,” he told WWD in 1978, when fashion had veered very far from the structured chic that had once been his calling card.

While the friendship between Hepburn and Givenchy was a much more genuine precursor to the actor-brand-sales matrix we see in fashion today — now an industry all its own — he also dressed society doyennes like Jackie O and Bunny Mellon and never ignored his stable of non-famous devotees.

It’s likely that none of those women were caught limping around Paris in early 1968 after stepping on a needle while trying on brand new Givenchy designs in the house atelier, as Hepburn was after getting it surgically removed, but still, the man knew how to cultivate loyalty.

Givenchy boasted that many of the women he’d been dressing since the start of his solo career still came to him at the cusp of the Eighties to place orders, despite the evolution of his designs.

Part of the enduring appeal may have been what WWD referred to in a 1963 review as the designer’s penchant for “sophisticated” but still youthful looks that worked to show a woman’s “best points.” At the same time, for the “boyish” Hepburn types, “Givenchy puts back curves.” That was something else the designer never ignored. He said he wanted women to look like the best possible version of themselves, and although insistent that modern trends did not bother him, Givenchy went against the apparent acceptance of women wearing looks that simply did not work for them.

“You must respect yourself,” he said.

Here, for the first time since its original publication, is an exclusive 1978 interview WWD nabbed with Givenchy, a decade before he sold his company to a pre-conglomerate LVMH. It reveals a man in the very middle of his career, still in awe of Hepburn, but trying to look forward, despite missing some things from the past.

For Givenchy, ‘The Past Is a Lovely epoch,’ but Not to Live In

NEW YORK — “It’s a good silhouette — and it’s still the same,” says Hubert de Givenchy of Audrey Hepburn, the actress who personified the Givenchy look in the Fifties and Sixties. “That long neck, the long legs, the charming face…Of course, she’s not 20 anymore. But the allure and the silhouette, they’re still the same.”

That Hepburn has retained her schoolgirl svelteness is no doubt a source of gratification to the designer who, at 51, says he values, and looks for, continuities in his life.

He speaks with satisfaction of still having customers he had 25 years ago, and says he tries to bring to his clothes the same aesthetic simplicity that characterized his early collections.

And when the tall, still lanky designer greets you in the cream-colored offices of Givenchy Inc. in New York, he emanates a boyish affability and deference that probably charmed clients when he opened his first Paris salon in 1952.

But, as Givenchy quickly concedes, there are as many changes as continuities. Hepburn is in semiretirement. Givenchy — who, as couture’s boy wonder, shook the fashion world with his egg-line and balloon silhouette’s — now describes himself as a “classic” designer. The Givenchy label adorns not only his couture, but a ready-to-wear collection and the products of 20 licensees. And the designer says the world of couture, as he originally knew it “in its last beautiful years, just after World War II,” no longer exists.

“I am of tradition,” he says matter-of-factly, “but that doesn’t mean I have an old outlook on life.” Indeed, although Givenchy’s pale blue eyes look mildly perturbed when he describes “how fast” the tempo of the Seventies is, they are more characteristically wide-eyed with interest and amusement as he describes a visit to Studio 54 or “how fascinating” a perfume factory can be. One of his favorite phrases is, “You must adapt.”

With a multimillion-dollar licensing empire and a Paris apartment, a mountain chalet and a country house to his name, one might argue he’s adapted well. And Givenchy says he finds the ‘70s a perfectly habitable decade.

And the same, as he discussed changes in the fashion world, he remarks, “The past is a lovely epoch.

“When I began to be a designer,” he says, “I remember Hattie Carnegie came and ordered 18 pieces. Ben Zuckerman was there and many American buyers…That whole atmosphere of couture.” He slices the air with is arms.

“Now it’s press, not so many buyers,” he continues. “It’s another feeling. It’s a difficult thing not to have a nostalgia for the beginning of my career. At that time is was very encouraging to be a designer. In two days you’d cover all the money to spent to make a collection — that’s something to be nostalgic about.”

He laughs, and as an afterthought says, “But the licenses replace what was.”

Givenchy says he also misses the veneration of the individual client, which was associated with couture, recalling how he’d go about designing for a favorite customer such as Gloria Guinness.

“You’d see a goddess, the image of that lady,” he says, slowly raising his hands as if to frame the memory. “You’d be thinking of a large private ballroom with her in it.”

He shrugs. “Now you’re more inspired by what you see on the street.”

The contemporary customer is not “of the same necessity,” he says. The “real suit,” he thinks, is virtually obsolete. And where before “you’d have one coat for the morning, one for the afternoon,” women today “want as little as possible in their wardrobes that would complicate their lives.

“It’s sometimes shocking,” he says of “the sudden freedom” he observes in contemporary fashion. “Everyone wants to have the liberty to wear anything, everything,” a revolution he believes began with “the hippies.”

And one thing he regrets, he says, is the number of women who dress in styles that don’t jibe with their own personalities. True elegance, he believes, is beyond fashion and speaks for itself.

“‘I’d love to wear the big pant, like I see on the street, or the blouson,” he said, “but I’d look ridiculous.” He calls attention to his long arms and legs. “I’m not that shape. You must respect yourself.”

Still, when he paid a visit to the Unique Clothing Warehouse he was intrigued enough by the clothes he saw to purchase a bombardier jacket for himself.

What he doesn’t like in contemporary design is the creation of “fashion just to shock” and the tendency to leapfrog from one style to another.

“Everything is so difficult now, he says. “One season there are broad shoulders, then none at all. A short dress, then a long dress. There’s no continuity. To change just because of change, that is not my idea at all.”

Then he adds, almost apologetically, “There’s a place for all that — the trendy things. You need a spot for everybody.”

Givenchy considers Balenciaga and Madame Grès the greatest designers of all time. A garment by Balenciaga, he says, “is like a surgery — by technique, it gives to women with bad posture some allure.” A dress by Madame Grès “is ore of an architectural construct.”

Among current designers, he admires Calvin Klein’s “linear simplicity — it looks like noting but it’s very substantial,” and the clothes of Yves Saint Laurent, “because he completely understands his epoch.”

Givenchy rates himself as a designer who creates “a product in good taste — that is perhaps classic and well-made.”

Dawn Mello, fashion director for Bergdorf Goodman, which until recently had the Givenchy boutique exclusively in New York (Saks Fifth Avenue will also open a boutique), says Givenchy designs “for that woman, who is often very well-to-do, whose name you do not read in the paper all the. It’s not shocking. It’s very quiet and very elegant.”

And Givenchy, whose couture has been bought by Jackie O, Lee Radziwill, Elizabeth Whitney and Bunny Mellon, says he doesn’t really care about having stellar names among his clientele. “It’s the loyal customers who will always buy. You wouldn’t believe how many Swiss and German and English women spend money.”

With the demands of various licenses with whom Givenchy says he meets regularly, as well as his couture, the designer says he’s never been so busy, and adds that he enjoys that.

“I love to drive my car (an old Mercedes) and be the first in my couture house. I adore that. Perhaps I’m masochistic. But I’m so happy to have this big house. I wait for my secretary, the models. If the need me, I’ll stay late at night. But I’m an early morning man.”

Asked for his passions outside of work, Givenchy said immediately, “La maison.” He spends his weekends in his country house, which he’s in the process of decorating.

He likes to collect objets d’art, but adds, I’m not too attached to them. I  think after six years you need to clean and begin anew. One day you leave the, and you live with your memories.”

He says he also likes to travel, anywhere (he recently visited Egypt and hopes to go to Afghanistan and India soon), and to read — particularly Proust and historical biographies.

But, asked if he’d like to have lived in another era, the designer does not hesitate in saying he would not.

“Of course everyone dreams of living in the 17th or the 18th century because of the costumes, but there were so many incommodities.

“And I like to have a nice warm bath.”

Looking Back to Predict Slimane’s Céline

When Karl Came to Chanel 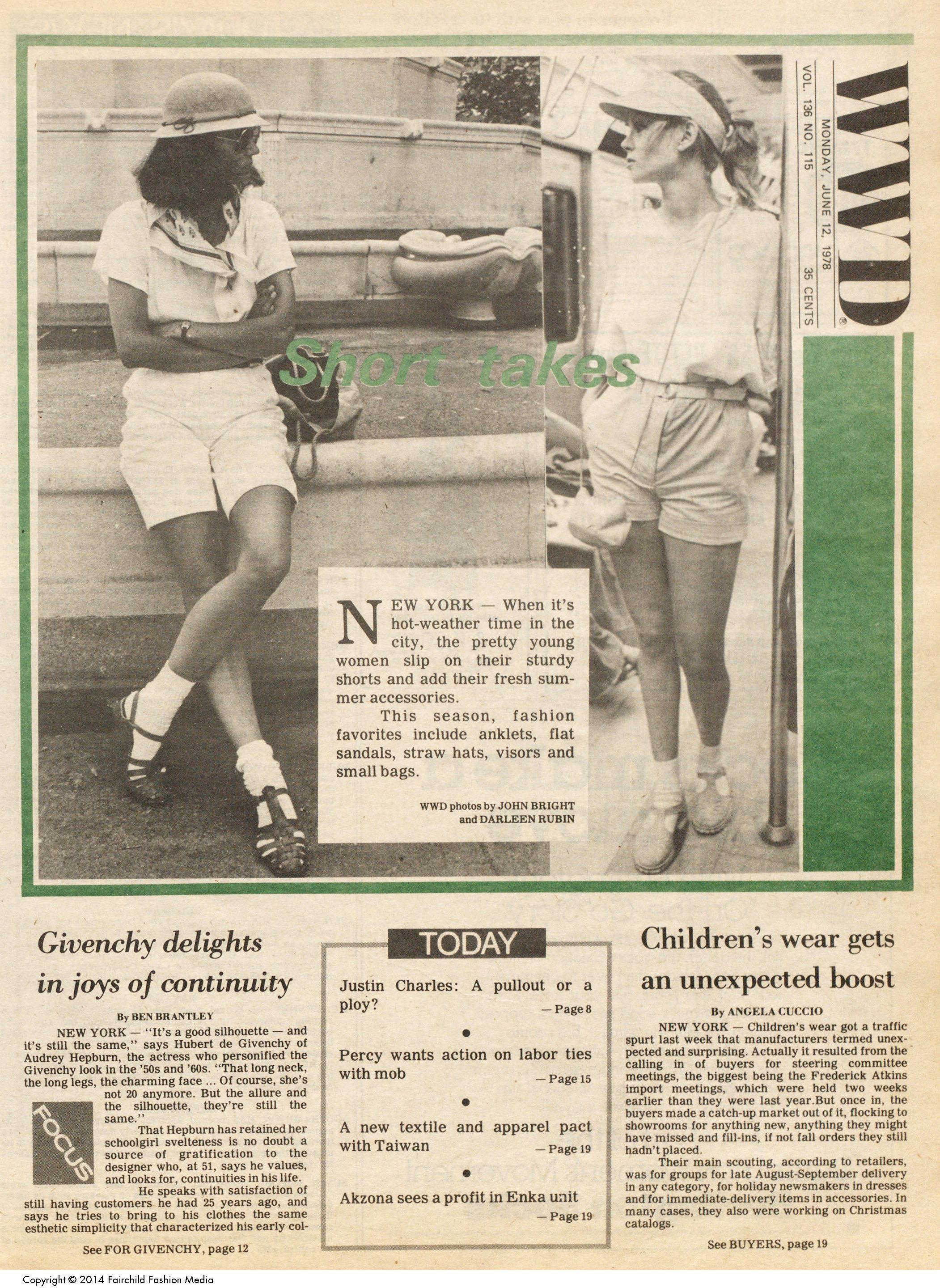 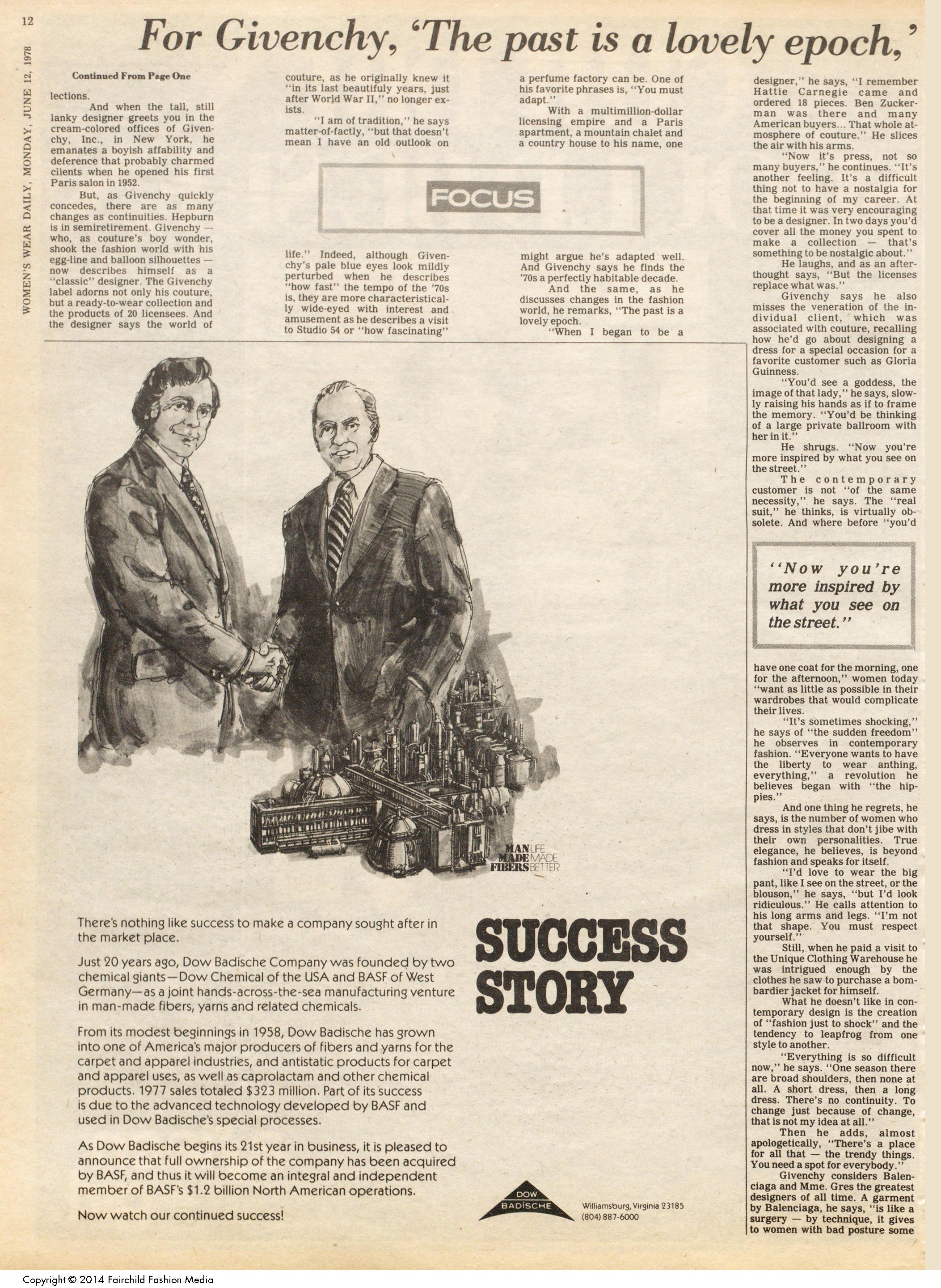 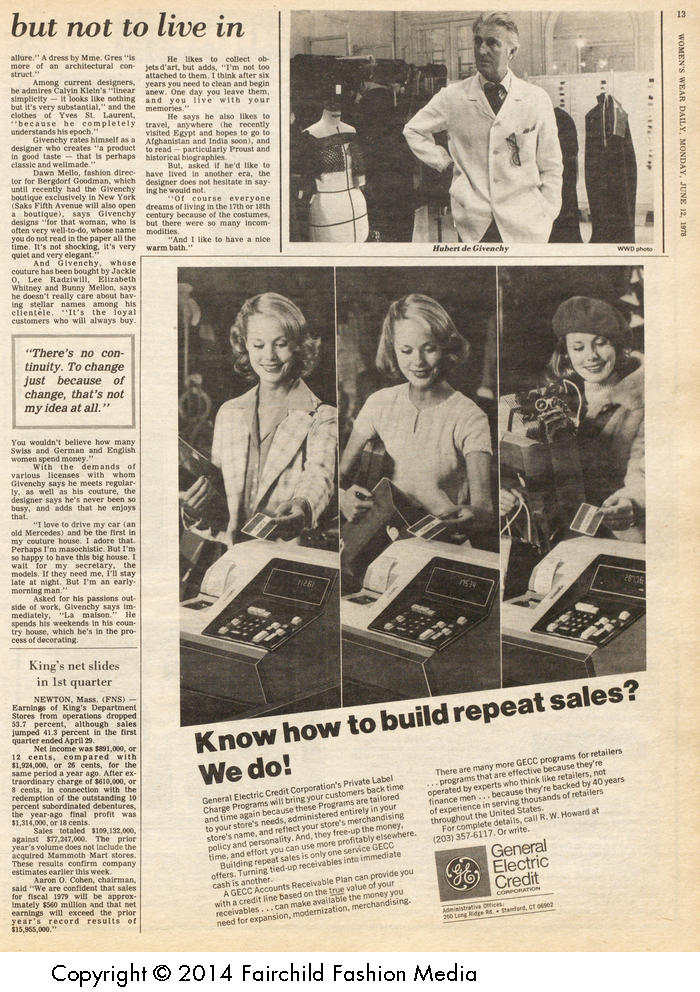