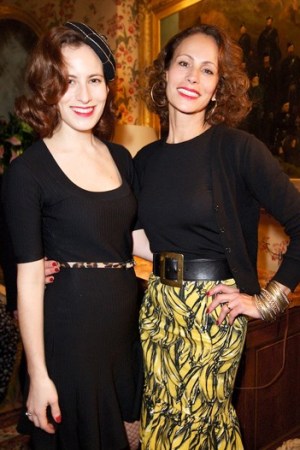 The genteel atmosphere at footwear designer Charlotte Dellal’s Mayfair tea party for her Charlotte Olympia label Tuesday came as a welcome respite for guests frazzled from London’s runway shows. Guests including Olivia Palermo, Cory Kennedy and Josephine de la Baume turned out to get a look at the designer’s rhinestone studded and leopard skin designs while they sipped tea and nibbled on scones and mini sponge cakes. “It’s nice to get some down time at an event like this,” said Olivia Palermo, who was soon due to fly to Tokyo to walk in a show for the retailer Kitson. “I’ll be walking in front of 50,000 people — imagine how long the catwalk’s going to be,” she marveled.

Meanwhile, Dellal screened a short film of the collection in an upstairs room at the club, directed by the British fashion photographer Jam. Called “To Die For,” the film took its inspiration from the glamour and intrigue of Agatha Christie novels, and starred British model Portia Freeman. “I’m going to cringe,” squealed a modest Freeman, just before she saw herself on the big screen — but she needn’t have, as the result was a stylish, feminine short film. Dellal noted that every photo shoot for her label has thus far been directed by a woman. “It’s always really girly with my brand — almost like a sorority,” she mused.