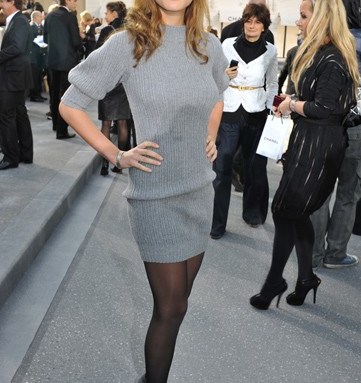 NORA’S ARC: Chanel has adopted a new Mademoiselle. Nora Arnezeder, the 19-year-old French actress who sat front row at the house’s show Friday, is being dressed by the brand for the promotion of her first film, “Faubourg 36,” in which she plays a cabaret artist named Douce, or Sweety. “It feels rather special to be here,” said the rising star, who was raised in Aix-en-Provence before heading to Paris to study at the International Academy of Dance, Song and Theater. “I’m more a jeans and sneakers girl at heart,” she whispered, adding that she spent hours listening to Edith Piaf and Charles Trénet records in preparation for her role. The most powerful moment of filming? “Performing with a one hundred-strong troupe in a reconstructed Thirties theater set in studios in Prague; I felt totally transported,” said Arnezeder. Other guests included Dorothy Walker Stapleton, wife of the U.S. Ambassador to France, and former first lady Bernadette Chirac who discussed the U.S. vice presidential debate. “Palin did well, I was very proud of her,” Stapleton could be overheard saying. Spanish actress Pilar López de Ayala said she’s looking forward to a whirlwind promotional tour for a trio of new films, for which she has Chanel outfits lined up. De Ayala is now living in Paris in a bid to learn French. Other guests included fellow Harry Potter stars Clémence Poésy and Emma Watson, Virginie Ledoyen, who said she turned resistance fighter for her latest film, “L’Armée du Crime” and Laura Smet, who teased she has a fashion project up her sleeve.