Paris-based brand A.P.C. became the latest to celebrate the opening of its Bay Area retail location. 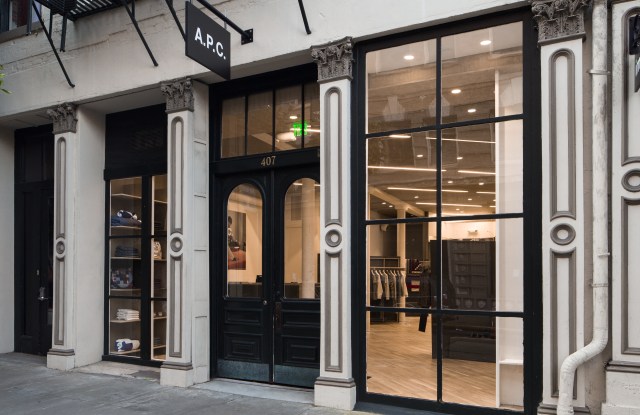 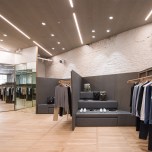 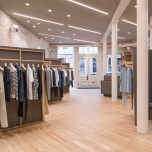 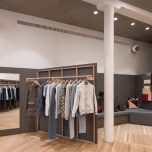 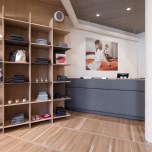 “New York, Los Angeles — San Francisco.” It’s becoming a more familiar refrain in retail openings, and this week, Paris-based brand A.P.C. became the latest to celebrate the opening of its Bay Area retail location. And given the subdued, somewhat “trans-seasonal” aesthetic of the brand that is well-matched to both the area’s workforce and weather, it’s a wonder that the opening didn’t happen sooner.

The store, at 407 Jackson Street, is in San Francisco’s Jackson Square neighborhood near the financial district and notably a bit removed from luxury stores that make up Maiden Lane and Union Square. That, said designer Jean Touitou, who was not at the opening event, was intentional. “The area is full of architectural and design firms,” he said, so “it naturally aligns with A.P.C.’s customer. We like spaces that are slightly off-beat and more interesting than a typical retail area.”

He also made sure to mention that “this means we avoid obscene rents that don’t get passed on to our customers.”

After a soft opening this spring, the brand celebrated Thursday with pretzels in the form of the letters A., P. and C. — which stands for “Atelier de Production et de Création,” in a nod to both production and quality of design — on the occasion of France’s Bastille Day. The brand invited its most loyal San Francisco customers and local fashion types, who tend to favor the brand’s denim. (Don’t tell that to Levi’s, whose headquarters are just a few blocks nearby.) Another popular item is A.P.C.’s Demi Lune (half moon) bag.

The firm worked with the same architect who works on its other stores, who used zinc plate used in construction to break up the narrow and deep space into different “rooms.” The ceiling is made of raw cement building panels (left exposed, visible screws included), and the floor of diagonal oak planks. The result is “geometrically graphic” and “stripped of anything ornate,” which is evocative of the neighborhood, which tends to have a few men’s wear stores, as well as restaurants, among the businesses.

“Our expansion will be very careful,” Touitou said. “As we design each store with my architect Laurent Deroo, there is a big budget for each and we need to make sure each store is profitable.” This is because the brand remains independently owned.

In addition to the A.P.C. men’s and women’s collections and accessories, the San Francisco store will offers pieces from the Vanessa Seward collection; Vanessa Seward opens a store in L.A. this month.