A self-proclaimed “paper freak,” Karl Lagerfeld also has a penchant for pens. It’s why he created a line of writing instruments and lighters for S.T. Dupont. 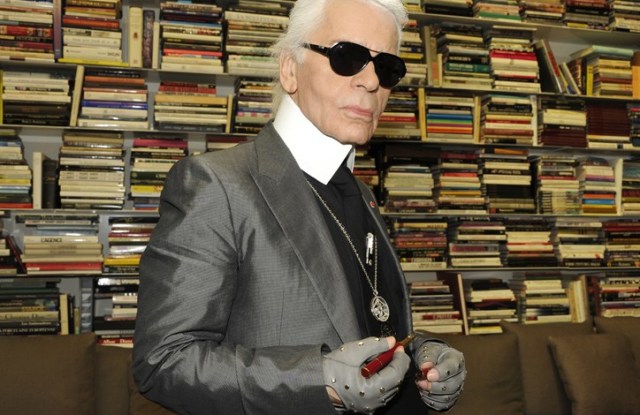 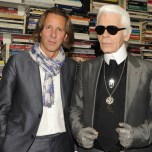 A PENCHANT FOR PENS: A self-proclaimed “paper freak,” Karl Lagerfeld also has a penchant for pens. It’s why he created a line of writing instruments and lighters for S.T. Dupont, which he feted Wednesday night in his 7L bookshop and photo studio in Paris. “I wanted a fountain pen in a certain way,” he said, adding he collects pens and has so many “I cannot count.” S.T. Dupont, the company considers the project with Lagerfeld long-term, and the project could be expanded in the future. “He has many ideas,” said Alain Crevet, president of S.T. Dupont’s management board, of the designer.

BALL THAT GLITTERS: Publisher Assouline joined forces with jeweler Van Cleef & Arpels on Wednesday night for the launch of “Bals,” a lavishly illustrated book immortalizing nine of the most extravagant masked balls of the 20th century, which inspired the jeweler’s new Bals de Légende collection. “It’s great synergy,” said Martine Assouline, co-founder and co-publisher of the publishing house. Lee Radziwill, who is featured on the book’s slipcase, arrived with designer Giambattista Valli at the cocktail held at Paris bookstore Galignani, where they were joined by VC&A executives including worldwide president and chief executive officer Stanislas de Quercize. Nicholas Foulkes, the author of the tome, had no hesitation when asked which ball he would most like to have attended: Le Bal du Siècle thrown by Charles de Beistegui in Venice in 1951. “It’s probably the most representative of the balls in the book in terms of the people that came — you had Cecil Beaton doing the pictures — but also in terms of the seriousness with which both the host and the guests organized the entrées,” he explained. One guest who was actually there was Juan de Beistegui, the nephew and heir of Charles. “I went as Punch,” the 80-year-old recalled. “I made my entrée with friends from Paris in Commedia dell’Arte costumes.”

TURNING JAPANESE: After four decades of doing business in Japan, Leonard founder and president Daniel Tribouillard on Wednesday was conferred the country’s highest decoration for a foreigner, the Order of the Rising Sun. Guests gathered at the Japanese embassy in Paris for the ceremony included Patrick Thomas, chief executive officer of Hermès; Mario Boselli, president of the Italian Chamber of Fashion; and Françoise Montenay, president of the supervisory board of Chanel SAS. Tribouillard said he had been a regular visitor to Japan for 42 years, opening 100 stores in what is his label’s biggest market. “I could be a tourist guide in Kyoto!” he joked in his acceptance speech. Japanese ambassador Yasuo Saito credited the French executive with reviving interest in traditional Japanese kimonos by customizing them with Leonard patterns.