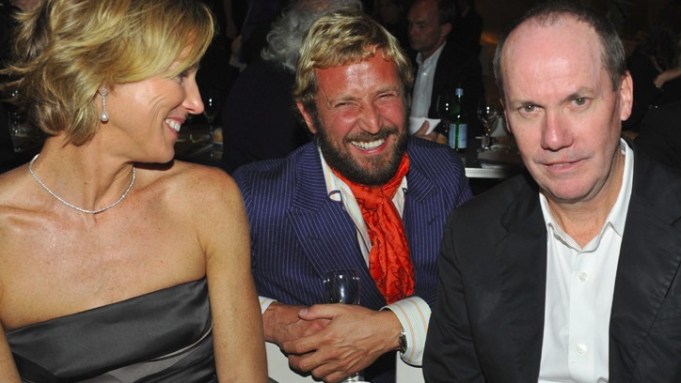 LITTLE PRINCE: “I don’t really do contemporary art. I collect early 20th century works, but Richard and I are old friends,” said Bryan Ferry, who hobnobbed with arty types at the opening of Richard Prince’s exhibition Thursday night at Paris’ Galerie Patrick Seguin. “It’s a nod to Louis Vuitton who made a nod to me,” said Prince of one fiberglass nurse hat chair, part of his first collection of furniture that was unveiled at the event. Later, at a dinner atop the Pompidou Center, the artist said that, in addition to his upcoming exhibition at New York’s Gagosian Gallery based on “black and white people on the same page,” he’s currently customizing a 1970 Dodge Charger once driven by Dennis Hopper in “Blue Velvet.” “I was also approached [for a project with] Tom Cruise and Katie Holmes, but I’m not going there; There’s no connection for me,” he drawled. Meanwhile Paris-based interior designer, India Mahdavi, clutching an oversized Richard Prince for Louis Vuitton bag, said she’s working on a new bistro concept with Thierry Costes, due to open on Rue de Buci. “There’ll be twisted design elements. It’s going to be a bit baroque, a bit rock ‘n’ roll,” she said. Meanwhile, Charlotte Sarkozy, who’s married to Nicolas Sarkozy’s half-brother, Olivier, said she was in Paris for a vacation. Asked if she’ be visiting any family, she quipped: “I think the president’s a bit busy.”