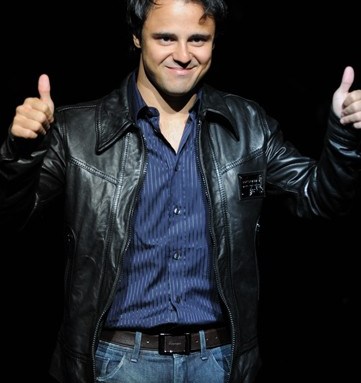 FAST TIMES: Brazilian Formula One racing driver Felipe Massa made a pit stop at Dolce & Gabbana on Saturday in between testing the new Ferrari F60 car for the upcoming racing season, which starts in March. “It’s not often I have the time to come to a runway show, so it’s great to be here,” said Massa, who was runner-up by one point to Briton Lewis Hamilton in last year’s F1 championship. “After a season like 2008, I’m even more motivated and pumped up to try to win the title.” Meanwhile, British actor Toby Kebbell said he loved “playing a bad guy” in “Prince of Persia: Sands of Time,” which he filmed over more than seven months in Morocco and London with Jake Gyllenhall and Ben Kingsley. “It’s very cathartic because you’re always trying to be on your best behavior, to be nice, but this way you can really get angry, spiteful– enhance all that’s bad,” said Kebbell, whose film “Cheri” by Stephen Frears will debut at the Berlin International Film Festival next month. By contrast, Madrid-born Ruben Ochandiano, who is working with Pedro Almodovar on “Los Abrazos Rotos” with Penelope Cruz, due out in the spring, said he’d gladly trade roles for once. “I’ve been really, really bad guys with no morals, rapists, murderers…I’d love to finally play a good guy,” Ochandiano said.