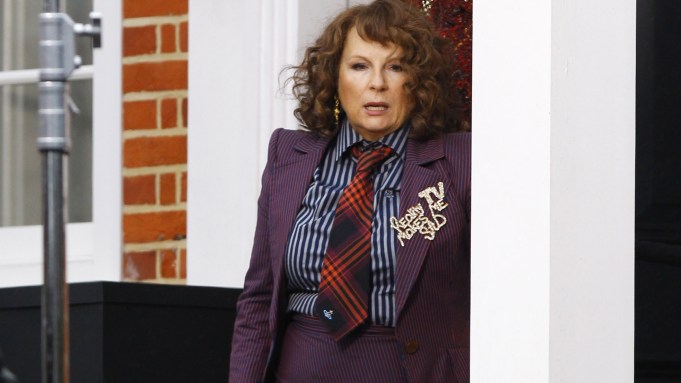 FABULOUS FASHION: Expect a load of lavish looks in the upcoming “Absolutely Fabulous: The Movie,” the British comedy that’s due to be released in select theaters in the U.S. on July 22.

The costume designer Rebecca Hale, who created the fashion for the cast of the British TV series “Absolutely Fabulous,” which first aired on the BBC in 1992, has come back for more. She curated the wardrobes for the upcoming film, looking to emerging and established British designers to dress every member of a cast that includes Jennifer Saunders, Joanna Lumley and Jane Horrocks.

Hale told WWD that although Saunders always used to wear Lacroix, she thought it would be great for her to dress either in Vivienne Westwood or Stella McCartney, and play with other designers like Ashish and Henry Holland. Meanwhile for Lumley, she looked to brands such as Mulberry and Jaeger – and also to the high street – with pieces from Topshop.

Saunders, who plays the role of Edina Monsoon, is seen in brands such as Yves Saint Laurent, Vivienne Westwood, Pucci, Giles, Chris Winter, Seafolly, and Talluhlah and Hope. She wore pieces alongside high street labels such as Topshop, Dorothy Perkins, Zara and Primark.

Lumley also wore a Christys hat, a Mulberry bag, sunglasses by Prada and shoes by Balenciaga, Jigsaw, Russell and Bromely and Dune. She wore a range of jewelry by H&M, Geraldine and Sophie Millard.

And the already-famous green dress worn by Kate Moss (when she’s pushed overboard into the Thames) was designed by Chris Winter.

In addition, the movie features looks from labels including Vin and Omi. They have designed jackets and bags featuring bold bubble designs with cutesy hashtags such as #LMAO, #DOA and #jffimf. Another bespoke look is a Latex amphibian suit with appliqués done by hand and bright yellow trousers with a smiley face design on the back pocket.