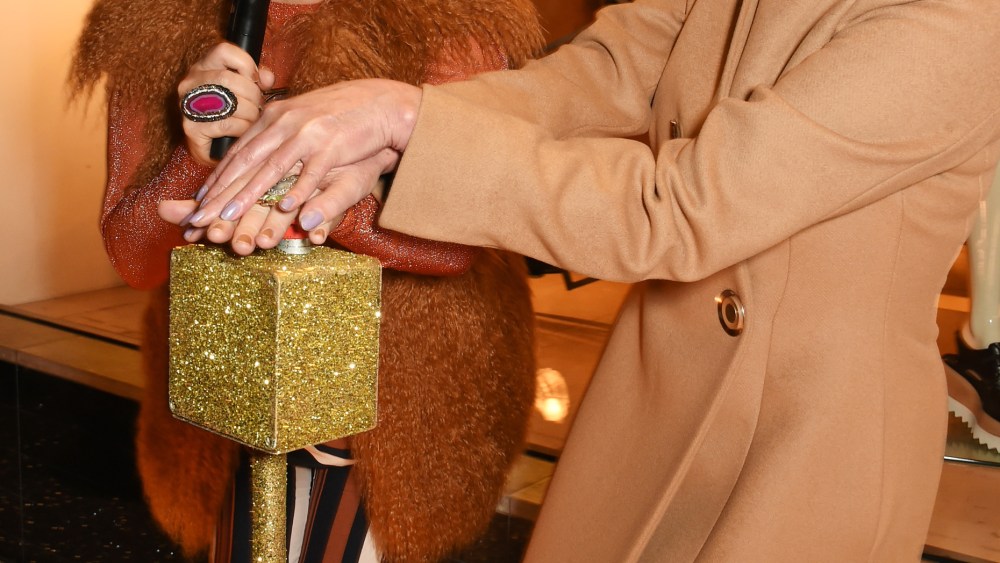 LIGHT HUMOR: Joanna Lumley and Jennifer Saunders reprised their roles as Patsy and Edina from “Absolutely Fabulous” for the second time this week, helping Stella McCartney to switch on the Christmas lights outside her Bruton Street flagship in London.

It was the second time Saunders has done the honors at Stella’s store – the first was in 2011 – and on Monday night she and Lumley, in character, handed McCartney her award for brand of the year at the annual British Fashion Awards.

The two greeted guests including Charlotte Tilbury, Lily Cole and Salma Hayek before pushing the shiny gold button that lit the store’s festive windows. “It’s such a joy that Stella let us anywhere near her store because that’s really rare,” said Lumley.

After they switched the lights on, both Lumley and Saunders danced around as traditional Scottish bagpipes played in the background. “Thank you for all the love Stella, I promise we’ll fit into your clothes one day,” they said, finishing one another’s sentences.

Guests donned novelty Christmas spectacles and snapped selfies with the windows as a backdrop.

McCartney was in full party mode, and said she’s looking forward to next year: “There will be so much going on. It’s the Olympics in 2016,” said the designer, who once again will be creative director for the Team GB official kit by Adidas, which British athletes will wear during the Rio di Janeiro event.

She also talked about her work on the White Ribbon for Women campaign with Kering and the double mastectomy bra she designed for Breast Cancer Awareness Month.

“The response we’ve had is so positive. When you speak about something a little bit more serious in fashion, people will pay attention,” said McCartney.