Virtuoso violinist Charlie Siem performed for guests at the Ritz Hotel in Paris for the launch of the 12th issue of Acne Paper. 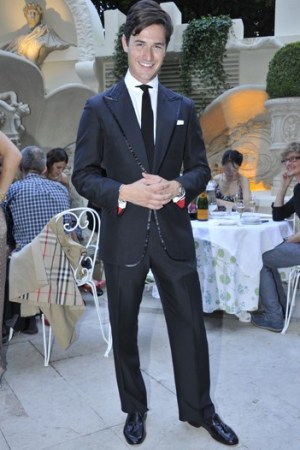 MUSICAL CHAIRS: Virtuoso violinist Charlie Siem was the main attraction on the terrace of the Ritz Hotel Monday afternoon — for early comers at least — as Acne Paper launched its 12th issue. “It’s so funny, I think quite a few people arrived after I played,” said Siem, whose new album with Warner music, recorded with the London Symphony Orchestra, is due out next month. Siem, who appears in ads for Dunhill, said just wrapped a shoot for the September issue of America Vogue. DJ Cecile Togni said she was gearing up to hit the decks at a party in Rome on Thursday for an opening of Mario Testino’s exhibition “Todo o Nada.” The Franco-Italian has also just designed a limited-edition bracelet for the Italian beer, Peroni, which will be out in September. Belgian designer Bruno Pieters said he has signed on to design a fall capsule collection for Weekday, one of H&M’s labels. Also in attendance was French model and actress Marine Vacth, the new face of Yves Saint Laurent’s perfume La Parisienne.  “I am doing more films at the moment,” said Vacht who is heading off to Tunisia to film “Ce Que le Jour Doit à la Nuit,” or “What the Day Owes to The Night,” with Vincent Perez and Nora Arnezeder.