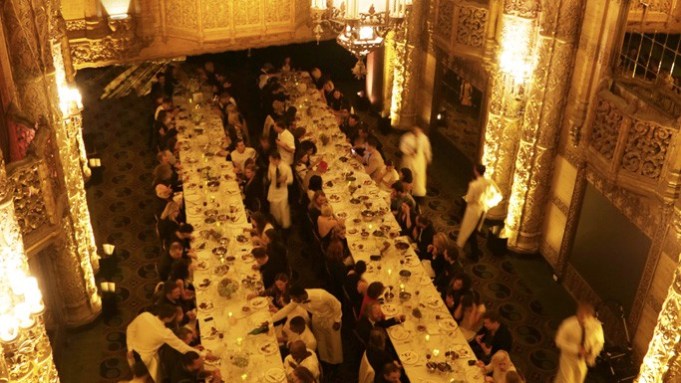 The bottom floor of the iconic turquoise Eastern Columbia Building was packed on Tuesday evening to celebrate Acne Studios’ opening in downtown Los Angeles. Guests were greeted by men donning pajamas in the Stockholm-based brand’s signature pink hue and offered lemon meringue treats that were fashioned after a giant mushroom installation found in the store.

While some previewed clothes, others found themselves lured by sounds of the L.A. band Allah-lahs to a cafe inside the store that will bring Swedish culture to customers with an assortment of tea and coffee. Shortly after 8 pm, it was time for dinner at the rococo Ace Hotel, another new addition to downtown a block away from Acne Studios’ store.

Christina Hendricks, Geoffrey Arend, Kiernan Shipka and Mena Suvari were among those who joined the brand for the meal. Before it commenced, the spotlight was given to Acne Studios chairman Mikael Schiller who encouraged everyone to down schnapps and sing Helan Går, the popular Swedish drinking song. On choosing the downtown site for his brand’s store, Schiller said, “It’s really weird, we’re opening up a store where there are no fashion stores. So hopefully they’ll come, time will tell.” Sophia Amoruso already committed to returning to the store saying, “depending on the shoes, it’s walking distance from work.”