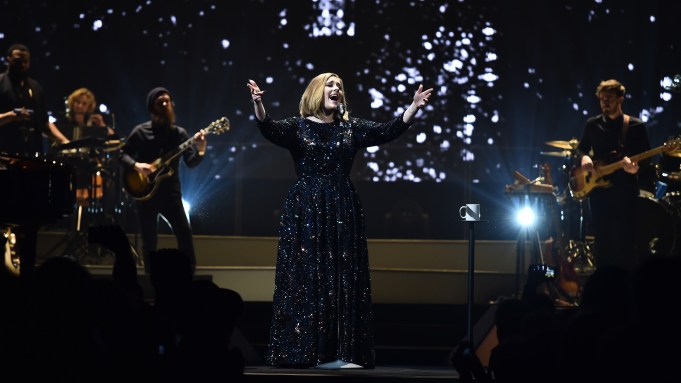 ALL ABOUT ADELE: Of late, Adele has worn Valentino and Giambattista Valli for her official engagements, but it was Burberry she turned to for her wardrobe ahead of the “25” tour. The brand has created a bespoke look for her to wear on stage, a floor-sweeping, black silk gown with floral hand-embroidered sequins. She wore it last night in Belfast, Ireland, the first stop on her tour.

The artist released her latest album in November and the “25” tour is her first in four years. She will perform in Europe and North America, with a final date scheduled for Nov. 15 in Mexico City.

Christopher Bailey, Burberry’s chief creative and chief executive officer, said he admires the singer enormously “for her approach to life, her sense of fun, her innate style and her massively powerful and moving voice and performance.”

Last Wednesday in London, Adele collected four awards at the Brits — most of them for her song “Hello” — dressed in a burgundy Giambattista Valli dress.

When she scooped up her Best British Female Solo Artist award, she honored fellow female artist Kesha in her lawsuit with her former manager. “I’d like to thank my management and record label for embracing the fact that I’m a woman, and being encouraged by it,” she said. “I would like to take this moment to publicly support Kesha.”

That evening, Adele joined other artists including Rihanna, Drake, Justin Bieber, James Bay, Annie Lennox and Gary Oldman, in a tribute to David Bowie, who died in January. She wore a Valentino gown to perform “When We Were Young.”