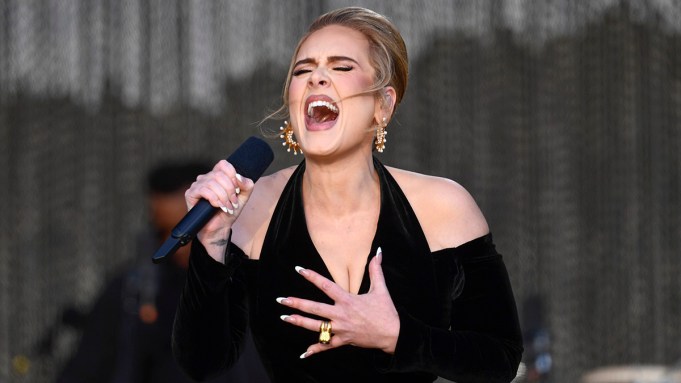 Adele made her long-awaited return to the stage, performing at her first public concert in five years on Friday. The 34-year-old singer headlined the multi-weekend BST Hyde Park festival, performing a two-hour set for two nights only. The songstress made her return to the stage in her signature glamorous style, embracing glittering obsidian designer pieces for both performances.

For the first performance, Adele — who was styled by Jamie Mizrahi — wore a Schiaparelli haute couture velvet jacket with a halter neck and long sleeves. The jacket’s silhouette left the singer’s shoulders exposed, with Adele cinching the piece around her waist with a gold metal belt for added structure. Adele paired the piece with a black sequined chiffon Schiaparelli skirt.

The singer wore a pair of large spoked gold circular earrings, coordinating a statement chunky gold ring as well. For her makeup, Adele went with matte nude lips, a winged eyeliner and saturated blushed cheeks. The star wore her hair up, pulling her locks into a sleek bun with tendrils framing her face.

For the second night, Adele chose a similar look, donning a black off-the-shoulder dress by Louis Vuitton. The floor-length dress featured a gently pleated top and voluminous sleeves, falling into a layered sequin-embroidered skirt. To echo the statement sequins, the singer cinched the dress at the waist with a black glitter belt. Adele wore her long locks down for the second performance, though she kept her makeup similar.