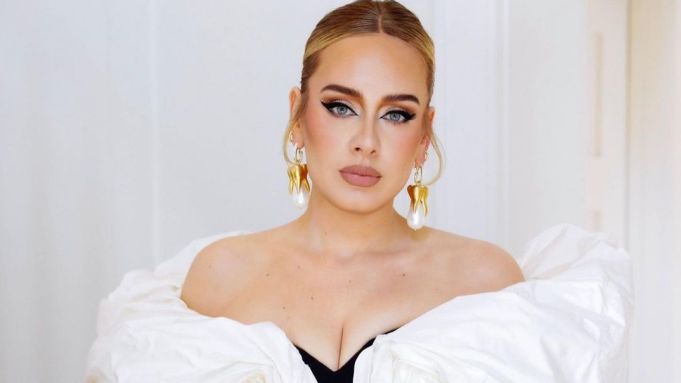 At long last, Adele is finally back.

On Thursday evening, the Grammy-winning singer dropped “Easy on Me,” the lead single from her upcoming and highly anticipated fourth studio album “30.” A music video, directed by Xavier Dolan (who was also behind the video for her hit 2015 single “Hello”), accompanied the release of her song.

The video starts off in the singer’s signature black-and-white silhouette — like her previous music videos for “Hello” and “Someone Like You” — as she prepares to leave an empty house with a suitcase in a patent brown leather coat and sunglasses. She hops in a car, pops in a cassette tape before she looks in the rearview mirror to show her trademark cat eyeliner and drives as the beginning of the song starts playing.

She passes by other young couples happy and in love as she sings throughout the piano progression. In the latter half of the song, the video turns into color to show Adele sitting in a red-themed room with toppled furniture scattered throughout and sheets of music flying as she continues the rest of the song. As the video concludes, it shows a short blooper of the singer bursting into laughter from the wind machine as the director says, “We’re keeping that,” to which Adele responded, “No, you’d never!”

The lyrics of “Easy on Me” seemingly tell the story of an attempt to fix a relationship and how giving up doesn’t necessarily equate to failure.

The number 30 is significant in the singer’s life as she separated and filed for divorce from her husband, Simon Konecki, when she was that age. They were married for five years and share a son, Angelo. The album will be centered around Adele’s road to “self-redemption” and “divorce,” according to the singer’s recent interview with British Vogue and a recent Instagram live Q&A the singer did last week.

“I feel like this album is self-destruction, then self-reflection and then sort of self-redemption,” she told the publication. “But I feel ready. I really want people to hear my side of the story this time.”

Adele first stepped onto the spotlight in 2008, when she released her first album, “19.” Songs like “Make You Feel My Love” (a rendition of Bob Dylan’s 1997 song), “Chasing Pavements” and “Hometown Glory” became huge hits for the then 19-year-old British singer. She reportedly wrote “Hometown Glory” when she was only 16.

From there, Adele’s music career skyrocketed. Later in 2008, she became the first recipient of the Critics’ Choice Award at the Brit Awards. During the 2009 Grammy Awards, Adele won the award for best new artist and best female pop vocal performance for “Chasing Pavements,” which was also nominated for song of the year and record of the year.

By the time Adele’s second album, “21” was released in 2011, she had already established herself as a household name in the music industry with her distinct vocals, emotional song lyrics and signature beehive hairstyle and cat eye makeup. Her hit singles from the project include “Someone Like You,” “Rolling in the Deep” and “Set Fire to the Rain.”

In 2012, she was tapped to sing the theme song “Skyfall” for the 2012 James Bond movie of the same name. She went on to win the Academy Award for best original song for the tune.

Her last album, “25,” was released in November 2015. Her lead single “Hello” dropped that October and was met with commercial and critical success.

Throughout her career so far, Adele has been nominated for 18 Grammy Awards, winning 15 in total. She swept all the categories she was nominated in with “21” and “25,” taking home the coveted song of the year, record of the year and album of the year awards.

Many fans were led to believe “25” was the last album Adele would produce since she told “The Late Late Show” host James Corden during her episode of “Carpool Karaoke” in 2016 that she believes in “trilogies” and that “25” is the last project.

With a new chapter in her life approaching, Adele has been more active on social media, recently posting a carousel of photos of herself on Instagram looking glamorous in a custom Schiaparelli dress and her new boyfriend, Rich Paul, a famed sports agent who manages big name stars such as LeBron James.

She also recently appeared on the covers of both American and British Vogue, marking the first time the two magazines teamed on one cover star.

Here, WWD looks back at Adele’s career thus far. Click through the above gallery to see more.

Everything to Know About Adele’s Upcoming Album ‘30’