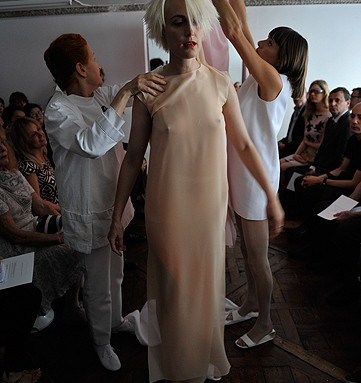 HOLE IN ONE: Adeline André staged what could be the world’s smallest couture show Monday, showing just one look for women and one for men. To demonstrate her patented three-armhole design (and reveal just how much fabric went into each piece), the four items, including a shirt, jacket and coat for men, were first pegged on a clothesline before being donned by the models. The women’s look, a layered silk crepe dress merging from flesh color tones to pinks and reds, took minutes to put on as meters of fabric and a staggering 21 armholes were wound around. “I wanted to show my work, and the history of the armholes, in a very precise way,” André said.

FRIENDS IN TWEED?: There’s no love lost between Chanel’s couturier Karl Lagerfeld and Audrey Tautou, the petite French actress who stars in the latest No.5 commercial and the film “Coco Before Chanel.” Lagerfeld was not involved in either project, but he took Tautou to task for remarks in an interview in a recent issue of Premiere in France. Asked if she wears a lot of Chanel, she replied: “Sometimes. This morning, I wore the rain boots.”

“I didn’t even know we made rain boots,” quipped Lagerfeld. “After that, I don’t have to be nice.” If he had his druthers, Lagerfeld said he would have suggested Penélope Cruz as a better role model for the storied French house.

RUSSIAN AROUND: Style mavens flocked to Assouline’s Saint-Germain store on Monday night for a book signing for one of its new editions — “Russian Style” by Evelina Khromchenko, editor in chief of L’Officiel Russia. With images of prominent Russian icons ranging from Catherine the Great to Maria Sharapova, and short, witty commentaries, the book recounts the history of Russian taste and its influence on international fashion. “We’re so used to computers it’s exhausting doing all this writing,” sighed Khromchenko, who’s a bit of a star in her country. As well as having provided the voice-over for Meryl Streep in the Russian-language version of “The Devil Wears Prada,” Khromchenko hosts a makeover show called “Fashion Verdict.”