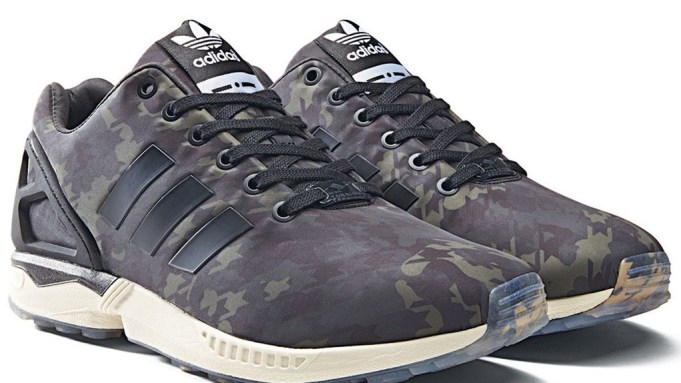 PIMP MY KICKS: Adidas Originals and Italia Independent hosted a bash in Milan on Thursday to celebrate their collaboration on a new line of sneakers and accessories, set to bow worldwide on Oct. 15.

Lapo Elkann, co-founder of Italia Independent, arrived at the event at Teatro Vetra in a wheelchair after breaking his heel in a motorcycle accident. “I’m sadly only able to wear one of the two,” he said, one foot clad in an Adidas sneaker, the other in a cast.

The entrepreneur helped to design six versions of the German sportswear maker’s ZX Flux shoe, including a muted print combining camouflage and hound’s tooth patterns; a high-tech version inspired by alutex, an aluminized glass fabric, and a rainbow animal print on satin-effect fabric.

“We offer a style icon like Lapo the chance to put his impression on the shoe and then almost anybody can be collaborator as we’ve offered that online: The chance to make really your own individual pair of the same shoes, taking inspiration from Lapo or some of the other ZX Fluxes we’ve done,” he said.

“So it’s a really fun project and I think it’s taken collaboration and even personalization to the next level,” Pierpoint added. Previously, Adidas Originals has tapped celebrities including Pharrell Williams, Rita Ora and Big Sean in addition to brands like Topshop, Opening Ceremony and Barbour.

Andrea Tessitore, co-founder and chief executive officer of Italia Independent, said that although eyewear makes up the bulk of its business, accounting for more than 80 percent of revenues in the first half of 2014, the company is looking to broaden its horizons by linking up with other brands.

“Italia Independent is building awareness through a business model that is in my opinion very innovative, because our core business is eyewear, but we are not just eyewear – we are trying to build a brand,” he told WWD.

In the past, it has produced capsule collections with companies such as Diesel, Borsalino, Invicta, K-Way, Toy Watch, Karl Lagerfeld and Colmar, among others.

The linkup with Adidas Originals is its most ambitious to date: The collection will be distributed in more than 900 doors worldwide, including Adidas Originals flagship stores, Italia Independent boutiques, specialty fashion retailers, AW LAB stores and online. It will be available in Italy, the United States, Germany, Spain, France, Brazil, Mexico, Japan, South Korea and Greater China.

“Italia Independent is trying to show that our definition of luxury is not related to price,” explained Tessitore. “The sell-in has been very, very positive and the numbers generated behind this collaboration are very important,” he said.

Sneakers are not the only thing Elkann likes to customize: The Fiat heir also has a passion for personalizing cars, such as the checked Fiat 500 that was parked outside the venue.

“In the near future, you will be seeing a new activity of mine which will be also on cars, because I most probably will be opening a garage in Milan. We will be doing peculiar cars and that’s one of the cars that my team has done,” he explained.