The 800-square-foot, two-floor store in London's Brompton Cross area will carry the activewear line and the Stella Gold collection. 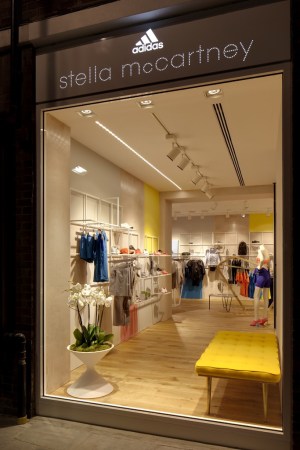 McCartney described the opening of the store on Fulham Road as “an amazing way to finish off the full voice of the brand,” she said. McCartney designed the space with architects APA, using materials such as timber, concrete, brass rails and glass shelving. Nick Craggs, marketing director for Adidas U.K., said: “The vision was to create a great and unique store concept that positions the Adidas by Stella McCartney label as a premium sports collection,” he stated, adding that its design will provide the basis for the “next generation” of store design when the label presents the Adidas by Stella McCartney line around the world.

This story first appeared in the May 29, 2012 issue of WWD. Subscribe Today.
You're missing something!
SUBSCRIBE NOW
load comments
blog comments powered by Disqus