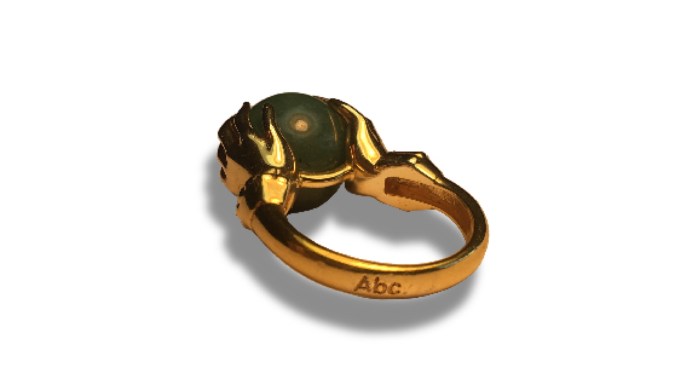 Los Angeles-based lifestyle company Advisory Board Crystals, which launched in April with a curated collection of rock crystals and a hand-dyed shirt, has added to its first season called “What Took You So Long” with hand-screened and painted T-shirts, a hoodie and a 14-karat gold-plated ring with interchangeable stones. The group, titled, “I Found Her Tomorrow” launches Sunday in La Brea Avenue boutique Union, which also carried their debut shirt. Retail prices range from $48 for short-sleeved cotton t-shirts, $50 for long-sleeved tees, and $175 for the hoodie. The ring, which comes with four interchangeable stones, is $100.

With their digital-first venture, Abc founders Heather Haber and Remington Guest endeavor to tell the story of how their meeting spawned both a romance and a business. She, an Otis College of Art and Design graduate and fashion designer, and he, a former Band of Outsiders staffer, met last year on August 29 in an Uber Pool car. Hence, the “I Found Her Tomorrow” double meaning with the launch on the day before their anniversary.

In addition to two deliveries in Union, a limited number of items will also be available on Abc’s web site, advisoryboardcrystals.com.

“If you think of ‘What Took You So Long’ as the title of a book, ‘I Found Her Tomorrow’ is the first chapter. So all forthcoming collections, capsules, and collaborations are a part of the Season One story until we change seasons,” said Guest, who doesn’t plan to adhere to traditional retail delivery dates.

The duo crafts the apparel in their Silver Lake studio, including a hand-sewn signature pull tab on the neckline of the tops. The rings are also made in L.A. As with their debut collection of crystals, the interchangeable ball-shaped stones are hand-selected for their meaning. Green aventurine is called “stone of opportunity;” black onyx, “stone of protection;” rose quartz, “crystal of unconditional love.” and amethyst, the “psychic stone.”