As the company undergoes a strategy shift, it is making a bid for a friendlier relationship with the fashion press, if still in a rather nontraditional way. 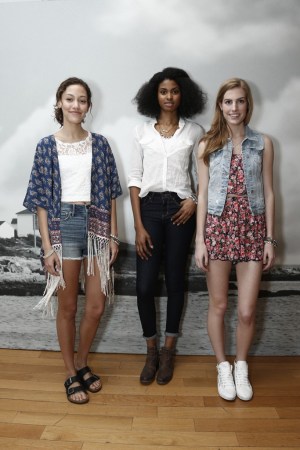 A&F AND HOLLISTER DO PRESS: For the first time in company history, Abercrombie & Fitch and Hollister held a press day Wednesday in New York.

As A&F and Hollister undergo a strategy shift following sales declines and growing pressure on chief executive officer Michael Jeffries, the company is making a bid for a friendlier relationship with the fashion press, if still operating in a rather nontraditional way. Models at the presentation wore styles that are currently in stores, with an edited selection of shipments running through August. So the emphasis was on summer, while for the rest of the industry, fall is becoming a distant memory. According to a spokesman for the brand, the point of the press presentation was “two part: One is that the perception of the clothes we carry is very different from the clothes we actually carry. We’ve gotten much more on trend, and people don’t know that. A big part of that is for the media to come out and see that. In the past, we haven’t been as open with providing samples and working with the magazines.”

They also aimed to distinguish A&F, which is targeted to college-age consumers, from Hollister, which is for the high school crowd, though both collections adhered to the on-trend mix of military pieces, distressed denim, Nineties florals and bohemian attire suitable for Coachella. The press preview was not the only news of the day: The company will also introduce black — a color previously banished from the A&F spectrum — in denim and leggings for back-to-school.