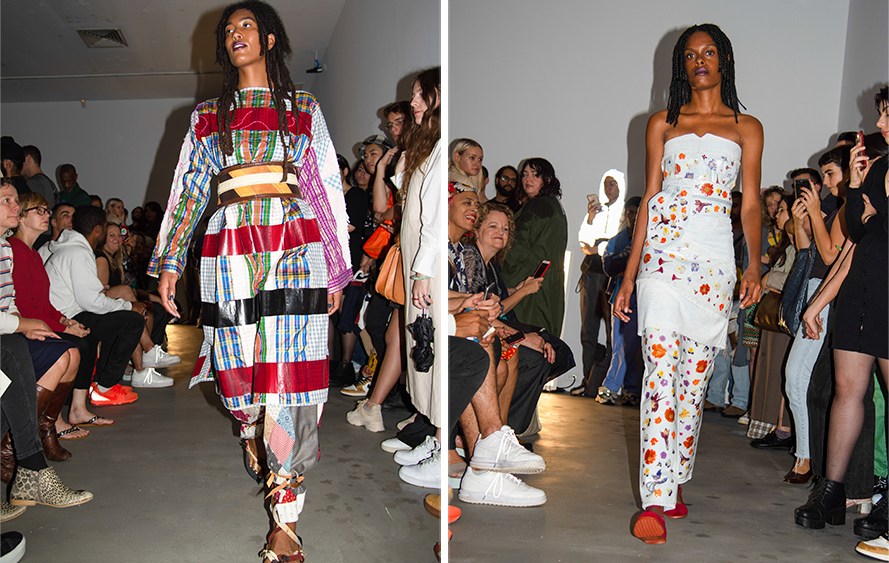 It was the evening after New York Fashion Week had ended, but more than 200 of the city’s art crowd had lined up in the pouring rain for yet another fashion show.

Andes-Gascon and McKinney have established a following in recent years as frequent collaborators of Lower East Side fashion ringleader Maryam Nassir Zadeh — a designer whose namesake label, along with the “It” girls in its orbit, epitomizes a certain New York cool.

In working behind the scenes, Andes-Gascon and McKinney have been afforded time to incubate a unique perspective on recycled materials, louche shapes, and feminine embellishments. Their initial show offered a range of looks that were just as haphazard as they were soft and wearable — each finished with hand touches.

Maddie Bailis, the women’s buyer for Brooklyn style emporium Bird, attended the show to support Andes-Gascon, whom she met through a wine club. She became enamored with her and McKinney’s work for its rebellious qualities. “They are making clothes because they want to make clothes, not to appease a buyer. We all know what happens when you get overwhelmed with retail being the priority — they are doing it because they love it,” said Bailis.

In toeing the line between art, DIY and commercial intent, SC103 is the latest newcomer in a downtown creative community where fashion, visual practice and music have become intertwined — functioning as a professional family.

SC103’s show was an ode to this community at work. Said Andes-Gascon: “The collection is titled ‘Bonds’ and that started with the bond between Claire and I. It is about how everyone has been helping us out for the show, and then how the clothes flowed seamlessly from one to the other — in the actual clothes there are links and bonds in the construction. We have been working on this theme for quite a long time and it feels like the culmination of that.”