Rodarte’s Kate and Laura Mulleavy were faintly nostalgic at the National Design Awards. 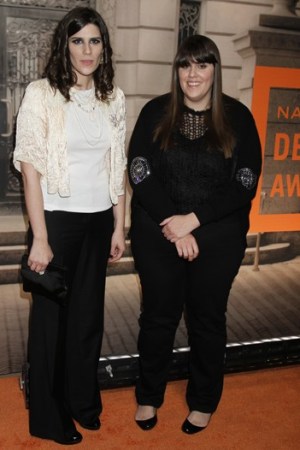 UP WITH DESIGN: The National Design Awards at Cipriani 42nd Street on Thursday night was first and foremost a feast for the eyes. Many guests gaped at the spools of ribbon suspended from the 60-foot ceilings and wondered how David Stark pulled off such a spectacle. They unwittingly reflected the evening’s theme of making design part of the public vernacular, which was mentioned repeatedly by award winners. Cynthia Rowley and fashion award runner-up Behnaz Sarafpour helped up the fashion ante, as did Lifetime Achievement winner Jane Thompson, who recalled how her late husband Ben arranged for Marimekko’s international debut at the 1958 Brussels World’s Fair. Interior Design winner William Sofield is at work on Tom Ford’s upcoming Rodeo Drive store, and Harry Winston’s Las Vegas boutique as well as the remodeling of its Fifth Avenue flagship.

This story first appeared in the October 18, 2010 issue of WWD. Subscribe Today.

Rodarte’s Kate and Laura Mulleavy, this year’s fashion award winners, were also faintly nostalgic, thanking those who believed in their inaugural effort five years ago. Laura Mulleavy said later, “What’s so nice about this is we’re being honored by people who are interested in design in so many different ways. You know, we’re always in our minds and in our showrooms [doing what we do]. It’s good to think of design as a larger discipline.” Rodarte’s airy creations will soon appear in a feature film, “Black Swan,” the ballet drama starring pal Natalie Portman. That connection and their friendship with choreographer Benjamin Millepied lead them to suit up dancers in the Dutch National Ballet. But Thursday’s gala forced the sisters to sit out Friday’s world premiere in Amsterdam — you can’t dance at every party.

PRESENTING DUTIES: This year’s presenters at the Fashion Group International Night of Stars gala are almost set. Jennifer Connelly will present Nicolas Ghesquière with the evening’s Superstar award; Richard Gere will hand Tod’s Diego Della Valle his Brand Visionary award, and Mayor Michael Bloomberg will be on hand to present Evelyn Lauder with her Humanitarian award. W magazine’s Stefano Tonchi will give Akris’ Albert Kriemler his Star award, while mother-and-daughter duo Anna Wintour and Bee Shaffer will do the same honors for Proenza Schouler’s Jack McCollough and Lazaro Hernandez. Pierre Cardin will receive his Legend award from Marisa Berenson; Calvin Klein will do the honors for Frédéric Fekkai in Beauty, and “Mad Men” star Elisabeth Moss will give the Entertainment award to Janie Bryant. Finally, Calvin Tsao and China Machado will be on stage together to present Rafael and Diana Viñoly with the Architecture trophy. The gala, themed “The Globalists,” will take place on Oct. 28 at Cipriani Wall Street, with Simon Doonan returning as the evening’s host.

ON THE HOT SEAT: The investigation into alleged tax evasion by Domenico Dolce and Stefano Gabbana has wrapped up but notices of indictment will soon follow for an assortment of people, including the designers, according to Italy’s daily Corriere della Sera. Dolce’s brother Alfonso, a shareholder, and managing director and board member Cristiana Ruella are among the others expected to receive notices. As reported, Dolce and Gabbana could be personally liable for more than $1 billion in unpaid taxes and fines, though the designers have always denied any wrongdoing. They are charged with tax evasion and abuse of rights relating to the 2004 sale of the Dolce & Gabbana and D&G brands to the designers’ Luxembourg-based holding company Gado Srl. A spokeswoman for the company could not be reached at press time.

TAMARA’S TOWN: Tonight, the Elton John AIDS Foundation will host its 9th Annual Enduring Vision benefit at Cipriani Wall Street, and Jimmy Choo chief creative officer Tamara Mellon will be among the five recognized. Her support of EJAF began in 2004 with the publication of “4Inches,” a book shot by Ellen von Unwerth featuring celebrities from Kate Moss to Christina Aguilera wearing nothing more than Choos (proceeds went to EJAF). And last year, Mellon released a collection of punk rock-inspired accessories called Project PEP that were sold to support the funding of the Simelela Centre in South Africa, which offers aid to victims of sexual violence. “I read an article in the Times in the U.K. about what was happening to women and children in Africa,” Mellon said. “It was so horrific I wanted to do something specifically for [them].” As of press time, Mellon, who moved from London to New York City last year, hadn’t prepared a speech or planned her ensemble, partly because she was busy shooting Choo’s next ad campaign. WWD caught up with her on-set to find out how she’s adjusting to New York City:
New neighborhood: Upper East Side.
Favorite hangouts: The Lion, Monkey Bar, Vico “for family dinners.”
Favorite after-hours: “It always seems to be the Boom Boom Room.”
Favorite salon: “I haven’t gone yet, but I’m planning to go to Garren.”
Favorite thing about NYC: “The street I live on [reminds me of London]. It’s very residential, quiet. It’s a beautiful tree-lined street, and the buildings are prewar.”
What she misses: “The people I grew up with in London; I’ve had a 20-year history with them. You miss that familiarity, but I’m making great friends here.”

CARTIER CUTS PRICES: It looks like at least one luxury label is taking the strength of the yen into consideration when it comes to pricing its goods in Japan, where things are notoriously more expensive than in the U.S. or Europe. Cartier took out full-page ads Friday in two of Japan’s biggest newspapers, The Nihon Keizai Shimbun and The Asahi Shimbun, saying it was slashing prices on select products in its stores throughout the Asian country. The advertisement, which features a letter to customers, said the price reductions are due to recent changes in exchange rates. Effective from Friday, the prices of select jewelry, watches and accessories were cut by up to 11 percent.

ADDING THE BAGS: Rent the Runway, the Web site for renting dresses and accessories, is doubling the size of its home base at 163 Varick Street to 18,000 square feet over two levels to accommodate growing customer demand and product array. Starting today, Rent the Runway enters the handbag category by listing 13 Judith Leiber luxury handbags, possibly encouraging other handbag designers to sell to the site. The Leiber bags, including some iconic minaudieres, rent for $75 to $150. That corresponds to retail prices of $995 to $2,895. “Diamond tickets” will be stuffed inside three handbags, entitling the customer to Everlon Diamond Knot bracelets — two one-carat white gold bracelets valued at $2,500 each, and a $4,300 two-carat white gold bracelet. Recently, dresses from Vera Wang, Calvin Klein Collection, Missoni, Preen and Nina Ricci were added to the site, which now has more than 120 dress designers. Jewelry is also on the site. “We’ve seen that women love adding jewelry to their dress rental — or even renting jewelry alone — so we’re eager to give her an even bigger assortment of accessories with handbags. It completes her evening out,” stated Jennifer Hyman, co-founder and chief executive of Rent the Runway.