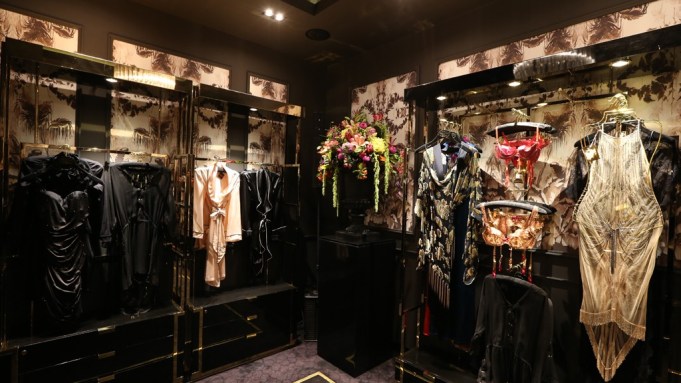 NOT-SO-SECRET AGENT: A room so packed full of scenesters the champagne bearing waiters could barely pass through, assorted starlets hip to hip in lace and leather, and a trio of scantily clad models choreographically writhing to David Bowie’s “Jean Genie” — such decadence on a rainy Wednesday night emanated not from an underground club or private party, but rather the opening of Germany’s first stand-alone boutique from luxury lingerie purveyor Agent Provocateur.

The British brand already has outposts in town via Galeries Lafayette Berlin and KaDeWe, as well as spots in department stores in Munich, Hamburg and Stuttgart. After the U.S. and U.K., Germany is a top market, slipping between third and fourth place neck and neck with Russia.

“We’re been pleasantly surprised that Germany’s so good. I think there’s room for quite a few more stores here, actually,” Garry Hogarth, Agent Provocateur’s chief executive officer, said. “There’s a lot of opportunity in Germany – much more than in many other European countries.”

The 1,065 square foot boutique sits on a glitzy stretch of Berlin’s Kurfürstendamm shopping street, with Saint Laurent and Louis Vuitton as neighbors. Inside, the Seventies-influenced decor includes Art Deco redux lacquered and mirrored displays, and walls papered with a tropical Rorschach print in shades of gray. “It’s very glamorous and opulent,” explained creative director Sarah Shotton. “We’re not just about underwear, we’re about luxury and being a major fashion brand.”

The well-travelled pair has been on a whirlwind global tour to keep the brand in the pink of health – from launching the company’s newest fragrance, Fatale, its first with Inter Parfums, to opening sales locations in Beijing and Toronto, as well as seemingly everywhere in between. “By the end of the financial year, I think we will have opened 27 [doors]. It’s been a big program all over the world,” Hogarth said, adding that Agent Provocateur currently has 96 stores in 26 countries, with further growth ahead. A more moderately priced sister line, L’Agent, which is designed by actress Penelope Cruz and her sister, model and dancer Mónica Cruz Sánchez, will see its first stand-alone stores open at the end of this month in New York and Los Angeles.

There’s no rest ahead for the louche luxe brand. Private equity investor 3i, which owns 70 percent of Agent Provocateur, is working with Goldman Sachs on a strategic review of the company to be completed sometime in 2015; the result could be the firm’s sale. Hogarth and Shotton were circumspect about the possibilities of ahead. “They might keep it,” said Hogarth. “They quite like owning it. I will say 3i is pretty conservative and it’s sort of been good for their image.”