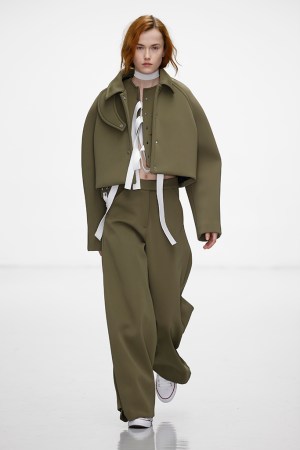 NATURAL WOMAN: Hot London design duo Agi Mdumulla and Sam Cotton are taking their first steps into women’s wear with a small collection that will launch for fall 2016. The two unveiled a few women’s looks during their men’s wear show on Saturday morning.

The designers, winners of the Woolmark Prize’s British Isles regional final, said that while they’ve designed single looks for women before, they want to create an actual collection. “It’s the beginning of women’s for us, and we’re taking it slowly,” said Mdumulla backstage following the show.

The women’s looks were in step with Agi & Sam’s men’s wear and included elongated silhouettes and generous proportions — as in a long stretchy gray sweater dress and a roomy olive shearling bomber. Women’s trousers were also wide-leg and swooshing, while coats were long with rounded shoulders. Fabrics were sourced from Italian mills.

The design duo won 50,000 Australian dollars, or around $38,000 at current exchange, in cash sponsorship as part of the prize in July, and are competing for the International Woolmark Prize final. The winner will be announced later this month at Pitti Uomo.