The London label hosted an event at ME Hotel during London Collections: Men. 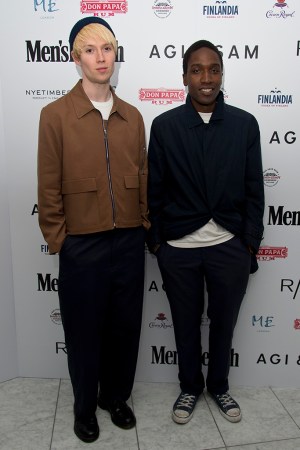 KING OF CLUBS: Agi Mdumulla and Sam Cotton, designers of the Agi & Sam men’s label, were the men of the hour at the ME hotel’s Radio Bar in London Sunday night, when British Men’s Health hosted a party in their honor.

Mdumulla and Cotton, who had shown their spring collection on Saturday during London Collections: Men, also made sure the party was a family affair. Cotton’s parents were in attendance, but without his 95-year-old grandmother, who had sat front row at the duo’s show. “When we came out for the bow, I saw her and waved and she just burst into tears,” Cotton said. “I wanted to hand her a bunch of flowers but Agi said no.” Mdumulla reasoned that as up-and-coming London designers, they needed to cultivate a more “badass” image than giving a grandmother flowers would suggest.

Mdumulla has had plenty of practice at honing his hipster credentials. Alongside designing the collection, he hosts a club night at Clutch, an ethical fried chicken restaurant near to east London’s Columbia Road. “I play everything from Madonna to Drake,” said Mdumulla of his favored tracks.