Anna Hu is scheduled to receive the “Artistic Vision of the Year” award from the China Institute. 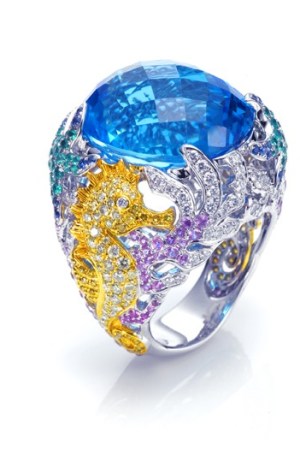 HU GOT IT: Anna Hu’s star continues to rise. Three years after opening her own business, followed by a namesake boutique in the Plaza Hotel and a prestigious collaboration with Cindy Sherman (the artist got to keep the one-of-a-kind piece), Hu is scheduled to receive the “Artistic Vision of the Year” award from the China Institute. The ceremony will take place Friday, at New York’s Cipriani 42nd Street, to coincide with the Chinese New Year. Hu said she was “shocked” when Leslie McDonald, associate director of development for the institute, came into her shop in November and told her she had been selected, and the first jeweler at that. “I had attended their gala in June when Cai Guo-Qiang [the renowned and somewhat controversial artist who works with gunpowder], who was a mentor of mine, won the Blue Cloud Award,” Hu said. “To be in the same category and recognized as a contemporary artist as a jeweler was a proud moment for me.” Past winners include chef, restaurateur and author Ming Tsai, and Professor Renqiu Yu, associate professor of history and director of the Asian Studies program at Purchase College, State University of New York.

LEADING LADY: Carla Bruni-Sarkozy may be setting the red carpet on fire at the Cannes Film Festival in May. “Midnight in Paris,” the Woody Allen-directed movie in which she plays a museum curator, will kick off the fortnight-long event in the French Riviera resort on May 11, organizers said Wednesday. It’s not yet known whether France’s First Lady will be on hand for the premiere, but her appearance on the steps of the iconic Palais des Festivals would foster buzz around the movie, which marks her acting debut.

FASHION REINVENTION: After leaving her namesake company last May, Devi Kroell is returning this New York Fashion Week with a new label, called Dax Gabler, which she will present at the Chelsea Arts Tower on Feb. 16. Little information about the line was available at press time, other than that it will feature outerwear, footwear and handbags priced between $250 and $890.

“I am so grateful to be able to design again,” Kroell said. “Dax Gabler is a liberating and stimulating challenge because it is all about reinventing myself.”

WU DID IT AGAIN: If you have a good thing going, why change it? That’s apparently Jason Wu’s attitude. The designer has teamed up with bergdorfgoodman.com again to live-stream his upcoming runway show on Feb. 11. And, as with last season, select looks from the collection will be available five days after the show for exclusive preorder on the Web site.

FAST FASHION: Puma has tapped fashion designer Cedella Marley, the daughter of Jamaican reggae icon Bob Marley, to design the Jamaican track and field team’s Olympic uniforms, as well as podium and ceremony wear for the London 2012 Olympic Games. The designs will be worn by male and female participants, including three-time Jamaican Olympic gold medalist and fastest man in the world, Puma athlete Usain Bolt. “I can’t think of a better person to design our Olympic outfits than Cedella,” said Bolt. “Puma got that right…hooking up with a legendary Jamaican. She’s a great designer but also carries on the spirit of our nation through the legacy of the Marley family. It’s going to be inspirational to run in London with that energy surrounding me.”

Puma’s Olympic wear will be accompanied by a complete lifestyle collection of apparel.

MODEL MUSES: Big-name models of yore are clearly the flavor du jour (think Kristen McMenamy closing the Chanel couture show last week). If Adrienne Vittadini has its way, some supermodels will be making a major mark this coming New York Fashion Week, too. In the spirit of the “Modern Muses” theme, the fashion house cast some of the most iconic models for its Feb. 16 show at The Box at Lincoln Center. Carol Alt, Pat Cleveland, Roshumba, Irina Pantaeva, Carmen Dell’Orefice and Frederique van der Wal will be in the fall lineup from the knitwear-based fashion brand that relaunched in 2008. They will be part of a group tableau, and will sport two looks each in the show. “I couldn’t have dreamed of a more dynamic and gorgeous group,” enthused Mary Gleason, Adrienne Vittadini brand president.

AIMING EAST: Everyone’s got an eye on China, even the Milan-based fine jewelry house Pomellato. This past December, the company opened its first store in the country at Beijing Yintai Centre. And on Wednesday, at a presentation at New York’s Crosby Street Hotel, the jeweler unveiled a new collection aimed at the Asian customer: a series of teapot-shaped charms dubbed “The Five Charms of Five O’ Clock.” The designs, all crafted from silver and rose gold and priced from $1,000 to $1,100, retail, range from an Empire-style teapot to a floral one with a tiny gold frog on the lid to, naturally, a traditional Chinese version.