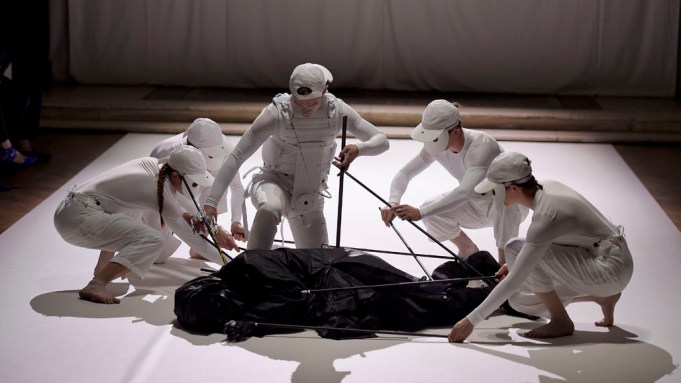 HIGH CONCEPT: Aitor Throup is another designer seeking to upend the seasonal fashion show format. His presentation of what he called “trans-seasonal prototypes” Sunday night was more of a fashion performance.

Cue an eerie, suspenseful presentation called “The Rite of Spring/Summer/Autumn/Winter,” held in a deconsecrated church in Marylebone. There, a steel puppet was animated by a troupe of puppeteers who were all clad in white, and wearing white masks. Modeled on a cast of Throup’s body, the puppet was brought to life, paraded, exploded and seemingly resurrected in the course of the performance.

As for the clothes? The puppet wore utility-influenced pieces, such as a lightly padded nylon jacket, a papery parka, a dip-dyed hoodie, skinny combat pants and a bright white parka worn with a tulle underskirt.

Since graduating from London’s Royal College of Art with a master’s in men’s wear in 2004, the designer has directed music videos, and collaborated with Stone Island and Umbro on collections.

Throup noted that the one-off pieces — complete with the puppets — would be sold as art works at London’s Dover Street Market from Tuesday, June 14 through to July 6. The designer said that his aim was to “reimagine what men’s wear looks like.” Describing the designs in this presentation as “concept cars,” Throup said that he will manufacture a commercial collection based on the designs, to launch for January 2017.