Alber Elbaz is king of the castle — or at least, his puppet alter ego is. 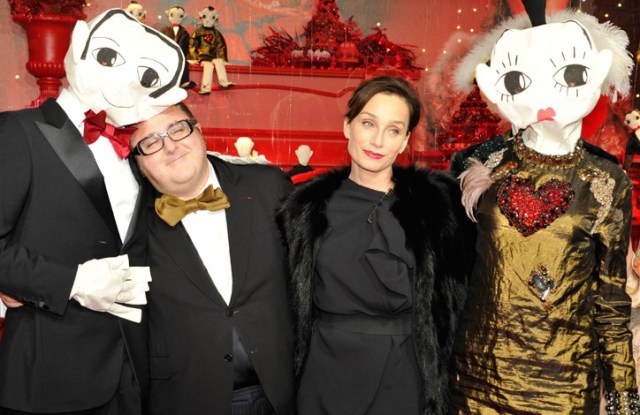 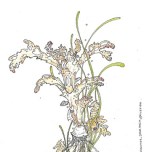 FEEL THE BURN: Alber Elbaz is king of the castle — or at least, his puppet alter ego is. The Lanvin designer on Wednesday cut the ribbon on the Christmas window displays at the Paris flagship of Printemps, which feature his ’n’ hers puppets based on his sketches dancing in a French chateau setting. The male puppets wear the designer’s trademark tuxedo and bow tie, while the female characters are outfitted in the gold lamé dress with a ruby heart that closed his fall collection. Actors dressed as 18th-century nobility drew up in horse-drawn carriages at the unveiling ceremony, where Elbaz was joined by British actress Kristin Scott Thomas, Printemps owner Maurizio Borletti and Paolo de Cesare, chairman and chief executive officer of the department store chain. “It’s quite bizarre to see your cartoon in the windows dancing and running. I was just told that each puppet will be running in two months about 200 kilometers, so I’m thinking, God, how many calories are they burning there?” Elbaz quipped afterward. Just don’t expect him to start wearing a crown. “I always was afraid to be the designer of the moment. I’m not. I’m not Miss America and I’m not Miss France that is chosen for a year,” he said. “I think that my job is not being famous. This is not a job, this is maybe a result. What I do is make women and men look good — that’s my job, and that’s what’s more important.”

This story first appeared in the November 11, 2010 issue of WWD. Subscribe Today.

OUT THE DOOR? There’s speculation of a management change at Halston — and that chief executive officer Bonnie Takhar is exiting the company. Halston executives could not be reached at press time, but Takhar’s exit would come after Sarah Jessica Parker arrived at the house in January, taking an equity stake and assuming the role of president and chief creative officer.

LEG UP?: Gisele Bündchen, who made a surprise appearance on the Balenciaga runway during Paris Fashion Week in September, is doing an encore. Word has it the leggy beauty will star in the French brand’s spring advertising campaign, lensed recently in New York by Steven Meisel.

HOW SWEDE IT IS: Karl Lagerfeld is turning his hand to crystal. In the spring, the multitasking designer will launch a collection of glasses, votives and gifts in collaboration with Swedish crystal specialist Orrefors under the Orrefors by Karl Lagerfeld label. Orrefors, based in southern Sweden, dates back to 1742. The Lagerfeld items are slated to retail from 50 to 1,000 euros, or $69.50 to $1,390 at current exchange rates, from May.

CASHING IN: Bob Colacello’s one-of-a-kind portrait by Andy Warhol was part of a Contemporary Art Day sale on Wednesday at Sotheby’s, and the painting was expected to be sold above the estimated value of $300,000, since Colacello was formerly part of the Warhol rat pack. As editor and later executive editor of Interview, Colacello worked closely with Warhol. The portrait was a gift from the artist but apparently Colacello never hung it, so he doesn’t mind cashing out now.

MODEL SON: The image of a relaxed Pierre Sarkozy, wearing a blazer and a loose tie, sailing off the coast of Saint-Tropez and fronting the latest Philipp Plein advert, is likely to evoke anything but financial austerity. The young, music-producing Sarkozy is the son of French President Nicolas Sarkozy, who is currently under fire for spending cuts, pension reform and the Bettencourt debacle. The advert was shot for the Switzerland-based company by Italian photographer Olimpia Soheve.

GREEN HANDSHAKES: Between the line snaked around the corner of Tenth Avenue and the NYU party atmosphere inside, the CFDA and Lexus Eco Fashion Challenge event, held Tuesday at Skylight West, did not attract the CFDA crowd. While the young partygoers hit the open bar, the top 10 finalists, including John Patrick of Organic and Justin Giunta of Subversive Jewelry, stood by proposals detailing their commitment to sustainable design. In compliance with the Challenge rules, each designer crafted a plan to produce at least 25 percent of their next collection in an environmentally friendly manner. The top three receive sponsorship from Lexus for their fall collections. And the winners were: Monique Peán, Costello Tagliapietra and Maria Cornejo, whose plan included recycling fabrics, hand-dyeing and using Cupro, and noted that “in this day and age, it’s too idealistic to think you can be 100 percent ecological.”

HOLIDAYS AT SEA: John Galliano is lending his creative talents to London’s Claridge’s hotel for a second year. Later this month, the designer will unveil the John Galliano for Dior Christmas tree he’s created for the storied hotel’s lobby. And while last year the designer fashioned a sparkling white tropical tree, this year he’s called his tree “Under the Sea.” It will feature silver leaves and pink coral, and will be adorned with sparkling sea creatures. “I wanted to create an underwater fantasy and have mixed pink corals, sea horses, anemones and jellyfish, all glinting like gemstones, swimming amidst the silver leaves,” said Galliano.

The tree will debut at Claridge’s Nov. 25 and will stay on display through Jan. 5. Thomas Kochs, Claridge’s hotel manager, added: “Following [Galliano’s] spectacular tree last year, we simply could not resist to see the new design, which will keep London talking throughout the season.”