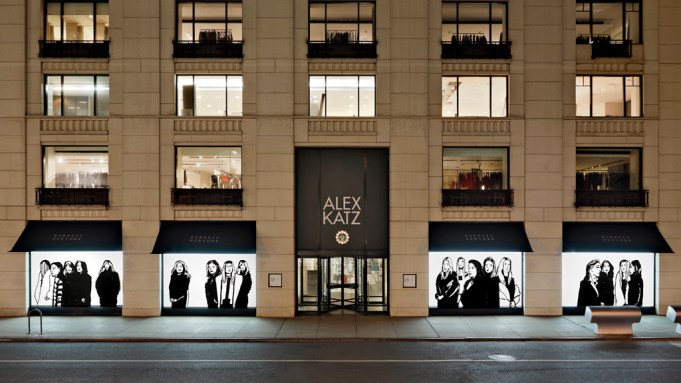 HEARD OF KATZ?: As someone who has had 200-plus solo exhibitions since the Fifties, Alex Katz is living up to his copious reputation with a new collaboration with Barneys New York and the Art Production Fund.

Through June 14, shoppers and passers-by will find 8-foot-high silkscreened prints across four of the flagship’s Madison Avenue windows. The more observant will spy in the expansive 60-foot mural (which is one of Katz’s all-time largest) APF cofounders Yvonne Force Villareal and Doreen Remen, APF director Casey Fremont, Katz’s wife and longtime muse Ada, and another source of inspiration, Elizabeth McAvoy.

The Brooklyn-born, Cooper Union-schooled Katz, who has worked with Barneys’ Dennis Freedman in the past, has also created the limited-edition Art Production Fund x Alex Katz x Barneys New York collection. With Memorial Day approaching, the Katz-designed beach towel and tote bag are early favorites with shoppers as well as the artist’s take on a scarf, a Barneys spokeswoman said.

“I feel art is for all people and should be accessible to all people. If art is a mere decoration, then it can just stay in a house. An artist really cheats himself if he doesn’t make his work accessible,” Katz once told an interviewer at Colby College Museum of Art in Maine. The 87-year-old artist, who received a scholarship to the Skowhegan School of Painting and Sculpture in 1949 and has since summered in Maine for years, has donated 800-plus works to the school over the years, which are shown intermittently in the Max Gordon-designed Paul J. Schupf Wing for the Works of Alex Katz. This summer “Brand New & Terrific: Alex Katz in the 1950s” will spotlight his rarely seen early work to illustrate how his signature style evolved through landscapes, still-lifes and portraits.

Curator Diana Tuite said the show’s name “borrowed the title from Katz’s 1961 manifesto ‘Brand-New & Terrific,’ which affirmed his intentions to find the contemporary in the traditional form of painting.”

The Colby Museum will present a companion exhibition “An Artist’s Gift: Acquisitions from the Alex Katz Foundation.” Curated by Katz and featuring works given from the Alex Katz Foundation, there will be a selection of art by such contemporary artists as Elizabeth Peyton and Dana Schutz, as well as some from Katz’s generation such as Ronald Bladen and Al Held. Katz’s admirers can also find a sampling of his work at Gavin Brown’s Enterprise in New York through June 13 and the “Alex Katz, This Is Now” exhibition that opens at the High Museum of Art in Atlanta June 21.